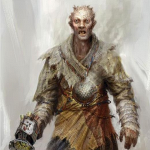 Greetings, ThreeSecondRush, and welcome to the Fallout Wiki! We appreciate your contributions, and we hope you will make more!

Hi Rush, we were actually debating your edit earlier today on Discord (I wasn't 100% on the relevance myself). As there are a couple of people involved, it might be better to talk it out on the article talkpage or Discord if you want to join us there. Sakaratte - Talk to the catmin 16:51, April 4, 2018 (UTC)

@TSR Thank you for joining the Discord to discuss the edit there! If you ever have any questions or complaints or whatever, just contact me on my talk page or on Discord (private or in #the-editorial-bullpen are both fine). I'm always happy to talk about anything related to Nukapedia.
- FDekker talk 17:29, April 4, 2018 (UTC)

Btw, let me answer the question you asked on Mara's talk page.
If someone undoes your edit and you disagree with that, try discussing it on that person's talk page (because reverting it will only result in the other reverting it again, etc.). As you pointed out, it's possible that they stonewall the discussion (i.e. they don't respond, or they refuse to actually discuss anything) or that the discussion just gets stuck and you can't reach an agreement. If that happens, the best thing you can do is find a "mediator" to help you in the discussion. I'd say the admins and mods are always good candidates, though any user can function as a mediator. Just leave them a message on their talk page explaining the problem, and they'll see if they can lead the discussion to something workable.
- FDekker talk 17:40, April 4, 2018 (UTC)

I do get where you're coming from and I am aware of the connection to the alt-right. If I believed that it was being used in that sort of context I would take action.

Heil Hitler wouldn't be acceptable as it has no other context for random use. If there was a discussion about WWII or games based in that era I'd case by case it, based purely on how and why it was used, but otherwise it would be gone. I think Heil Hitler wasn't the best choice of wording, but if I swap it with Jihad (which is very similar to deus vult) or Cracker (another term I learned could be racist racist recently) I can see what you're saying.

When the subject came up, I did do my homework and rather than being pointed to a bunch of alt-right sites or derogatory terms, I got pointed to a polygon article which did show the connection to the alt-right, however, it also showed a strong connection to gaming so I looked at it in a case at hand situation (there was more than For Honour mentioned and as You'll see Crusader Kings II came up there too, something that I also saw in Space's post history.) There was no-where that said it was racist, and the examples given didn't give it in a racist light, so I was working with what information I had.

Personally, it is a phrase I'd like to overlook if it is contextually appropriate (see: medevial), however I know that is always going to be open to disection. Probably best avoided to avoid controversy. Sakaratte - Talk to the catmin 18:35, April 26, 2018 (UTC)

I assume you wanted to ask why I deleted your post on the James hsu discussion. I know you're not the first to tell someone to just look at the wiki, but I've deleted similar posts in the past as well. Yours in particular I deleted because I didn't want to dissuade the new user, the comment itself was semi-dickish (although I've seen and said worse), and, ironically, the article you linked did not actually answer the user's question. Paladin117>>iff bored; 15:20, June 5, 2018 (UTC)

I hope you don't mind me posting this here, but I didn't want to get too off-topic in the Weapons Name post. My favorite Chapters are the Ultramarines, Imperial Fists, and Salamanders! I also like their respective Primarchs, with Rogal Dorn being my favorite. Sorry for my excitement, it just seems like WH40K fans are few and far in between lol Hexonith (talk) 17:24, October 20, 2018 (UTC)

Hi 3sr. I left the wiki for a while but I have noticed that you still active at the wiki. it’s very impressive. I just want to ask something. What’s the fallout games that you have played before?. —Preceding unsigned comment added by Nawaf123 (talk • contribs). Please sign your posts with ~~~~!

I think it's desirable, but I certainly wouldn't remove a quote because there's no audio. If you're on PC it should be possible to extract the sound files from the game though. It's not too hard if you know your way around the game files a bit.
- FDekker talk 21:48, July 11, 2019 (UTC)

"On this day in history" - Lufthansa Flight 181Edit

On 13 October 1977 the West German far left terrorist organisation Red Army Faction hijackd this flight, executed the pilot and tried to force the West German government to exchange hostages for imprisoned RAF members. The aircraft was stormed on 18 October in Somalia, marking the end of the German Autumn.

I hardly knew anything about the RAF's terrorism before I read up on it a little and I imagine people outside of Germany know even less about it, so it'd be cool if you'd feature it. But this is really just an example, there's tons of kidnappings and bombings and whatnot to choose from.

Also, even though I'm not Irish, their whole struggle, with unificication, the IRA and so on is really interesting and might be worth a look sometime.

Voting concluded this morning, and you were our runner up. I know everyone on /d appreciates the near daily work put into This Day in History as well as those like your tin foil hat post from a few days ago. Here's a little badge and all the bragging rights to accompany your title as 2019 Runner Up.

Good afternoon TSR. I'm writing to a few users asking if they'd like to judge an upcoming fanfic contest that will be held here alongside Laat and I. The job entails reading through the entries on /d and blogs and deciding with us which is the best. The topic for the competition has yet to be chosen, but the winner will recieve a badge on their userpage to commemorate the event. Message me on my talk page or Discord whenever you get the chance. Best regards, Saxhleel12 (talk) 20:22, April 13, 2020 (UTC)

Retrieved from "https://fallout.fandom.com/wiki/User_talk:ThreeSecondRush?oldid=3190367"
Community content is available under CC-BY-SA unless otherwise noted.