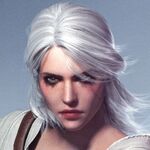 Greetings, Kennyannydenny, and welcome to the Fallout Wiki! We appreciate your contributions, and we hope you will make more!

I wanted to personally welcome you to Nukapedia. I hope you enjoy your time here as much as on TES wiki, and I'll be looking forward to seeing further productive edits from you. Just let me know if you have any questions over our wiki or community, and I'll be happy to help at any time. Happy editing!

Thank you for your recent edit over the Elliott Tercorien article-page. Unfortunately, your edit was reverted by one of our editors, since clipping and texture issues are non-notable according to our current bug policies.

For instance, if you see a radscorpion half-way through the ground, that' a clipping bug.

Ow, ok. Thanks for explaining! And its funny that you use that example since i've seen lots and lots of radscorpions being stuck into the ground :D and just recently, dogmeat. Thanks again! {{SUBST:Signature|Kennyannydenny}} 21:23, April 29, 2013 (UTC)

Sure thing! And yeah, that's the reason why I always use that example. :P The only real reason why we don't include those specific sort of bugs is simply because there's just so many, along with it being because of engine limitations, meaning that it's listed on the overall bug page instead of individual article-pages. Thank you for understanding.

No problem. Well i've been used to Bethesda's games and understand there are too many of such bugs. But since i'm used to Elder Scrolls wikia rules, and the rules here are a bit different, i'm trying to get used to these rules. For example: we don't use the template verify. But i must confess, our bug sections are a bit disorganized, and it is sometimes annoying to be checking all those bugs that are being added all day long. {{SUBST:Signature|Kennyannydenny}} 21:33, April 29, 2013 (UTC)

I thought I should probably tell you that we don't generally consider skill magazines to be notable loot unless they appear in large quantities. You can find the community policy on loot using the link above. Great Mara (talk) 09:12, June 18, 2013 (UTC)

And why is that? Why are skill books notable but skill magazines not? Thats really weird. On the page you mention are examples of which items are notable. But i don't understand one thing: Why is the Legion vexillarius armor notable, which is absolutely trash and i've found these armors several dozen times, but skill magazines are not notable? I personally like to see where these skill magazines are when i enter some area, because i need them often, but now i have open all specific skill magazine pages and check them all before entering the area just to see if there are any skill magazines lying around? IMHO, this policy is leaking at all sides. {{SUBST:Signature|Kennyannydenny}} 09:22, June 18, 2013 (UTC)

The notable loot policy was based around community discussions held in the forums. Skill books are considered notable because they confer a permanent stat increases whereas the magazines are only temporary. As far the Vexillarius Armor, some items are added to that list based on the number of set, non-random locations they can be found in the environment. Great Mara (talk) 09:27, June 18, 2013 (UTC)

I still think its weird that skill magazines are counted as non-notable such as, for example, baseballs and scrap metal, and are not counted as notable such as skill books. {{SUBST:Signature|Kennyannydenny}} 09:30, June 18, 2013 (UTC)
Ps. What are we counting as large quantities? Since you won't see 20 Patriot's cookbooks lying at the same place... {{SUBST:Signature|Kennyannydenny}} 09:33, June 18, 2013 (UTC)

"As mentioned skill magazines are NOT notable loot, don't add them to articles as such" just so you know: I got this message after editing that page. So yes, i know. And thank you for the answer on the quantities. So the things would only be notable if say there would be 30/40 of them in one place. {{SUBST:Signature|Kennyannydenny}} 11:31, June 18, 2013 (UTC)

Ow yeah that may indeed be the same, I just discovered it and it said in my game: "College Administration Building". So I don't know how the other person got that name. But yeah, the articles need to be merged :) Thanks for noting! {{SUBST:Signature|Kennyannydenny}} 17:42, November 12, 2015 (UTC)

Note: words are capped when they are derived statistics, meaning Energy Resistance and Damage Resistance are in caps. But such examples are only exceptions. ☢ Energy X ☣ 18:19, November 14, 2015 (UTC)

Are you interested in patroller rights? You're doing good work here, using proper layouts with new pages. You're a serious editor and active, these are the people we need. It'd be a step before having the possibility to apply for admin. Jspoel

Move your mouse over the avatar you can see at the right top of the screen, click on "preferences", or go to http://fallout.wikia.com/wiki/Special:Preferences . Then you can just go to "Custom signature:" and make it what you want it to be :) - Greets Peace'n Hugs (talk) (blog) 22:32, November 30, 2015 (UTC)

From what I read of the Game Guide probably each variant can be a legendary, so then we'll have too many variants on the page. We leave a general note for now I think each variant can become legendary. When the Fo4 GECK is released we can check again. Jspoel

Hey, you're right about the perks increasing the item property values that I'm seeing. Is there a way to show the base values, other than loading a save where I don't have the perks? - JCuber (talk) 22:40, December 11, 2015 (UTC)

Not as far as I know. I just never bought any perk that upgrades such effects and values. The only thing tampering with my stats are sometimes perk magazines. So unfortunately no, if you see a value/effect lower than it shows in your game, its probably a good idea to not change those to the higher numbers, only if the lower number is ridiculous. For now, we must rely on each other to correct one another :) When the Creation Kit comes out in 2016, PC users have the ability to find such base values in there. Kennyannydenny (talk) 22:46, December 11, 2015 (UTC)

I would like to use the Christmas/New Year-wishes-tradition, though I'm a week late, to thank those around me who kept this wiki and daily life more fun for me during the past year. Everything just seems so normal and evident that we are here almost every day, yet it's very worthwhile to consider for a moment how wonderful it is to have people like you around me, making editing and being on chat a lot more enjoyable. I would also like to use this opportunity to wish a happy and healthy new year for you and everyone around you who is dear to you. I hope you'll have a great and healthy new year in which all your wishes may come true! - Greets Peace'n Hugs (talk) (blog) 00:06, January 6, 2016 (UTC)

How did you manage to access her terminal? The game stops then puts me back standing every time that I try. Great Mara (talk) 20:26, February 2, 2016 (UTC)

I have the exact same problem. When Googling it, it turns out most people (if not all) have this problem. The HUD disappears like you are going into the terminal, but the character doesn't sit nor uses the terminal. Unfortunately i don't have a solution since i'm on the Xbox One, but PC users can use the console to access it (I believe by moving the terminal slighty) or by installing this mod: http://www.nexusmods.com/fallout4/mods/4170/. Mods aren't on the Xbox One yet so I cannot download that. Fortunately, there was a PC user (user Verbal Street on Steam: https://steamcommunity.com/app/377160/discussions/0/496881136901286112/) nice enough to upload the contents of the console: http://imgur.com/a/8K37M. So if you're a PC user, you can access it. If you are a Xbox One or PlayStation 4 user, not so much i'm afraid. Kennyannydenny (talk) 20:32, February 2, 2016 (UTC)

You can create articles of the characters in Beaver Creek Lanes terminal entries, but not the bowling teams. How you set it up with Jules Verne is ok, and you can add a link to their real world wikipedia page. Jspoel

To me, each object should get a seperate page if they are different and have different characteristics. If the trend is different however, then feel free to remove the tag. Tha tag is just there to allow for discussion. I don't think the red plate comparison is fitting here, but the bones example is very similar. - Greets Peace'n Hugs (talk) (blog) 20:21, May 29, 2016 (UTC)

Hi there, I just wanted to notify all special rights holders of the new Bug policy proposals that are being put up for vote in the forums. If you have a free moment, please make sure to go in and vote. Forum:Bug Policy proposals and changes. ---bleep196- (talk) 19:54, June 19, 2016 (UTC)

Only thing is, I don't have the creation kit, I play on Xbox One :) I'm not sure if you can use the Creation Kit without owning the game, I couldn't in Skyrim at least, since you need the ingame files. Is that the same case for Fallout 4? Kennyannydenny (talk) 14:53, August 31, 2016 (UTC)

I think so. But it's ok, I can add the transcripts, aren't that many. Jspoel

I've seen Paladin117 add the tags, and I don't really agree with it. We've added pages for all mentioned-only characters in all these years, however minor they may be. Now there are pages with the delete tag, and pages of similar strength without the tag. I would reinstate the pages you created. Take it up with Paladin, you can add my opinion to it. Jspoel

All articles need to have at least some amount of unique content. As the content organization guideline puts it "Every article should be 'strong' enough to stand on its own. This means the subject provides enough content to write an article of decent length about it." All of the articles you wrote that day basically state the same thing "[This person] worked on the Cola-Cars ride." There's nothing unique about them and it can easily be summed up on the Cola-Cars article instead. Paladin117>>iff bored; 01:08, September 4, 2016 (UTC)

As hard as this may be to believe, I am not capable of personally going through this wiki's 23,000+ articles and making a determination of each of them. I updated that article because you pointed out to me and I investigated it. Age has nothing to do with it. It used to be that each of the names on the Yangtze Memorial had their own article that all said the same exact thing. Then, years after they were made, a vote was held and they were deleted. These pages have no weight to them at all, same as those. Paladin117>>iff bored; 17:55, September 4, 2016 (UTC)

Merry Christmas and (a bit too early to wish it already, but I'll do it already anyway) a Happy New Year!Edit

I would like to use the Christmas/New Year-wishes-tradition, to thank those around me who kept this wikia and daily life more fun for me during the past year. Everything just seems so normal and evident that we are here almost every day, yet it's very worthwhile to consider for a moment how wonderful it is to have people like you around me, making editing and being on chat a lot more enjoyable. I would also like to use this opportunity to wish a happy and healthy new year for you and everyone around you who is dear to you. I hope you'll have a great and healthy new year in which all your wishes may come true! - Greets Peace'n Hugs (talk) (blog) 02:29, December 24, 2016 (UTC)

Retrieved from "https://fallout.fandom.com/wiki/User_talk:Kennyannydenny?oldid=2669940"
Community content is available under CC-BY-SA unless otherwise noted.