Hey, nice to see another user at The Vault! It's nice to meet you. My name is AreYouGoingToEatThatNuke? or for short, call me Nukey.

Just to help you out and get you started, here's a few places that you should visit: 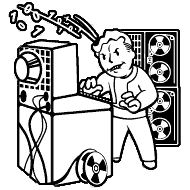 This is how hard the administrators work. Really.

A few things to be aware of, also, while editing on this Wikia and leaving messages on forums, blogs and talk pages:

Tips to get you started!

You are now an official Vault Resident! With these tip's in mind, you'll be a respected and popular user! 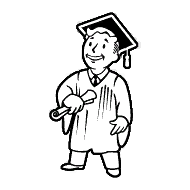 and you should put ur autograph under your messages

Im not obsessed with sporks. Its remarkable because they are great ammo for rockit launcher. Tezzla Cannon 16:19, April 2, 2010 (UTC)

No, your articles need to be deleted because Vault Suits are not misc items. Also, do not say in articles that you made an edit on that article. If you have any problems about editing, then i suggest you go to the The Vault:Policies and guidelines for info. Tezzla Cannon 19:59, April 7, 2010 (UTC)

That's Okay. In the future if you want to make an article, do what i do and make sure that the article has not already been made. Tezzla Cannon 20:10, April 7, 2010 (UTC)

Yep, it definitely surprized me. He is quite good at grammar, that is, compared to many people who are even older than him. When did you join the Vault? :] Ghouly89 (Talk) 00:00, April 9, 2010 (UTC)
Nice to meet you. :] I am somewhat new here myself, only been here since January. In fact, I will become an administrator soon, if all goes well. Ghouly89 (Talk) 00:09, April 9, 2010 (UTC)
About that website, I think there is some hidden conspiracy behind the wierd message. Aliens? No, too convienient. It must be the bastards at Obsidian, they want to play with our minds until Fallout: New Vegas comes out! :]

You should check the sources on the Spanish website; there are no horribly important vehicles in New Vegas.

Like i said the other day, look at the The Vault:Policies and guidelines if you have any probs with editing. Don't have a go at other users for doing there jobs. Tezzla Cannon 21:21, April 9, 2010 (UTC)

Yeah it is and sorry it took me a lot of time to learn it so look it up in the dictionary.

As it appears on your contributions, you seem to be contributing nothing in order to increase your edit counts. Please stop. Nukey talk 22:21, April 11, 2010 (UTC)

If my message at the top sounded negative, it wasn't meant to be. I was just stating that you weren't doing much but editing and sacing without putting anything in. Nukey talk

If you had read the policies and guidelines article you would know not to do false edits. I am not going to ask you again. For the third and final time, look at the Policies and Guidelines. Tezzla Cannon 16:03, April 12, 2010 (UTC)

That explains it Edit

Sorry I live in Cabo San Lucas, Mexico...but I dont speak perfect spanish I have to use translator on sum things

Retrieved from "https://fallout.fandom.com/wiki/User_talk:Felixwilliams12?oldid=534435"
Community content is available under CC-BY-SA unless otherwise noted.