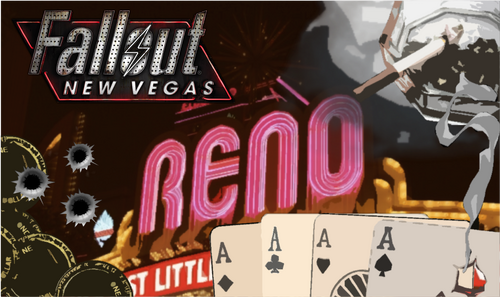 New Vegas and New Reno.
They go hand-in-hand, right? The bright casino lights on the surface hiding the dark underbelly below; the families all vying for monopoly over the unsuspecting Wastelander's greed. So naturally, if there's anywhere the Courier would feel at home, its right in Reno.

And judging by dialogue revealed throughout Fallout: New Vegas, its a place the Courier has called home - both according to Ulysses himself, and revealed through dialogue with Tops performer Bruce Isaac. Hell, its even in Nevada... I could go on. The point I'm trying to get at: There's no better place for a Fallout: New Vegas expansion than the biggest little city in the world itself, New Reno.

I mean, let's think for a second. There are already plenty of reusable assets:
Casinos? Check.
Mobsters? Check.
Gambling minigames? Check.
Its all laid out for a great DLC. And the link between Reno, Vegas and the Courier is already relatively established - both large gambling hubs, and the Courier has spent time in both cities. Not to mention Bruce Isaac, the man whom the Courier saw perform at the Shark Club before Isaac robbed Bishop (and slept with his daughter, but only a little), ultimately fleeing to Vegas to avoid the family's revenge.

Let's put things into perspective here. We're returning to Reno forty years after Fallout 2. Since then, the Chosen One's illegitimate son with John Bishop's wife has grown to become the new patriarch of the once-powerful crime family. But since the Enclave's defeat at the hands of the Chosen One, a turf war between the families threw the balance of power up in the air and it landed in the lap of no other than Orville Wright. The Salvatores died along with Louis, and the Mordinos lost their prestige once Myron was ironically killed by a jet addict, leaving them with no more claim over the drug than any Wastelander who can get his hands on some. Tiaret Van Graff (Gloria and John-Baptiste's mother), who operated out of Redding before the New California Republic annexed it and took control of trade, has since moved to Reno in an attempt at wresting power from Wright and becoming an even more powerful force to be reckoned with. Van Graff's already established empire puts her in the prime position to wrest control from Orville Wright.

However, the New California Republic is sitting idly by, waiting to see who takes control of Reno - at which point they'll swoop in and claim the city for themselves as a powerful trading hub that will help them in the battle against Caesar's Legion. This holds Tiaret back from engaging in a full-scale turf war with the Wrights until she can be sure the NCR are out of the picture.
Basically the main questline for the expansion would follow a simple concept:

The Courier finds themselves acting as the catalyst for Reno's vying powers to gain the upper hand. Will they work for the Wrights, who may not be the fairest leaders in Reno but have created an empire that the public have grown accustomed to? Or Tiaret Van Graff who promises order, albeit with a heavy hand? Perhaps the Courier will help the NCR in wiping out both sides to create an opening. Or maybe they want Reno for themselves - and they'll backstab anyone that gets in their way. It's a gamble, but hey - it's Reno. So who will you place your chips on?

The Courier will embark on a gritty tale of high living, low crimes, big shots with big egos and the people that cling to their every word. It will entail assassinating rival crime-bosses, undercover espionage to learn the family's darkest secrets, daring heists of the brightest casinos, escaping torture from captors and enacting torture on the captured and a lot of flashy shootouts in the grimy streets and swanky suites. Think of old Hollywood gangster films as the inspiration for this DLC.
The choices you make in the expansion will reflect on Vegas, and vice versa. For example, if the Courier takes care of Tiaret Van Graff, her Empire will weaken throughout the Mojave Wasteland allowing for the monopolisation of the Gun Runners who will employ travelling gun-caravans throughout major cities (Goodsprings, Freeside, Novac etc.) On the flip side, having already wiped out the Van Graffs in Vegas will give the Courier the option of boasting about it to Tiaret, effectively locking her questline out. The choices you make will have consequences.

All in all it's a tale in which everyone's story has many sides - how the public sees them, how they see themselves and how you see them. You have to decide what's more important; the survival of Reno, your own personal profit or even just getting out with your life. You can go in guns blazing like Al Capone, or you could try talking it out and working a compromise between the families.
Reno can suffer a variety of fates. Tiaret might be able to bolster the streets with her guns, but her own skewed perspective on order might be more than a little biased when profit is involved. More guns in the hands of the people might not make them safer - it's more than likely to put others in danger. The Wrights have always kept things under control and that's the way they like it. But is it the best for the people, when the common man is struggling in the streets and crime runs free as Orville turns a blind eye? The NCR might seem like the most noble choice for the future of Reno, but their cold outlook on order could stifle the city rather than let it thrive. As for the Courier - however they choose to rule Reno depends on the player.

But the most important thing to remember - what happens in Reno stays in Reno.
Thanks for reading.

Retrieved from "https://fallout.fandom.com/wiki/User_blog:Yes-Man/Fallout:_The_Apprentice_-_%22New_Reno_DLC%22?oldid=1809617"
Community content is available under CC-BY-SA unless otherwise noted.