Do men give gifts anymore? Do they try to impress the lady they're dating, or is this a thing of the past? None of the men I've ever...tried to associate with ever gave me anything (like sent me something, even though they knew my address) or even tried to impress me in some manner. In fact, it was the other way around: I tried to impress them, and I was the one always giving gifts of some sort (pictures, poems, etc.). So am I hoping for something that doesn't exist any longer, or were the men I knew just jerks only looking out for "number one"?

In Idaho, boxes of candy given as romantic gifts must weigh more than 50 pounds.

I don't know if that's a typo (what an amount of candy!), but I don't need something like that. Just a card in the mail would have sufficed.

Up next with the Fallout: London updates this week, we have some concept art on both of the weekly polls. For this selection, here's a few pics of bad guys featured in the project. 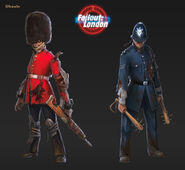 Various punk-styled enemies
Add a photo to this gallery

Not counting assistance from the Lone Wanderer, Courier, or Sole Survivor, who would win in an all out bad guy faction battle between Talon Company, Caesar's Legion and the Gunners?

THAT'S ALL THIS WEEK! IF YOU HAVE ANY IDEAS FOR ME, LEAVE THEM ON MY TALK PAGE!