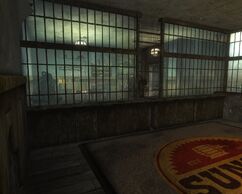 “Yeah, you might find everything you could dream of down in that den of inequity. But you're also just as likely to end up with your throat slit or with some abomination chewing on your bones.”— Commander Lana Danvers

The Maledictum is a nomadic blackmarket started up by the enigmatic ghoul Ba'al and his personal body-guard, Sabaoth, to help bring war and chaos wherever they go. They have currently set up shop in the wardrooms of Rivet City, where they can help exasperate the desperate situation found within the D.C. ruins.

The Maledictum is infamous across the wastes, and their business involves traveling to areas of strife and turning that strife into full-blown war. Whether with the use of technology, weapons, or even just information, their actions and business-acumen have resulted in many of the great atrocities since after the Great War, including, but not limited to: the release of blueprints and movements to aid in the fall of Navarro which would eventually cause the conflict between the NCR and Brotherhood of Steel over the technology at sake, information sold to the Legion that allowed the taking over of Arizona's tribes and the eventual discovery of Hoover Dam. And now, as of 2077, they have set up shop in the depths of Rivet City where they have created the Talon Company and are actively providing weapons to the super mutants and raiders plaguing the D.C. ruins.

The Maledictum is accessible either through a locked hatch located in the Rivet City market, or through a more complex route in the Mar'Jhan warrens, which can be entered through a breach underneath Rivet City itself. The black-market is spread about three wardrooms, consisting of a shop, a barracks, and the vaults.

The shop itself consists of a single room with a counter protected with steel bars and bullet-proof glass, cutting off the waiting area from the merchandise itself. This area is protected by two guards at all times, along with a prototype turret hidden behind a wall-panel.

This inventory is only accessible to the Lone Wanderer after permission has been granted from Ba'al.

The Maledictum only appears in Fallout 3.

Retrieved from "https://fallout.fandom.com/wiki/User_blog:GarouxBloodline/Maledictum?oldid=2132292"
Community content is available under CC-BY-SA unless otherwise noted.