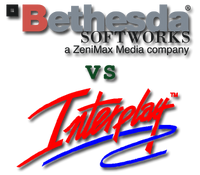 While the full results of the hearing regarding Bethesda's motion for preliminary injunction against Interplay in the Bethesda v. Interplay case were sealed from all but the lawyers, we managed to acquire the following bit:

What does it mean? Preliminary injunction is "an injunction entered by a court prior to a determination of the merits of a legal case, in order to restrain a party from going forward with a course of conduct until the case has been decided". Bethesda wanted the court to order Interplay to stop its work on Project V13 and its sales of the Fallout Trilogy pack until the case is decided; however, judge Chanasow decided not to. Until the case it fully settled, Interplay is free to proceed.

Of course, this doesn't necessarily mean that Interplay will win the whole case, but who knows, it might make Bethesda consider a settlement, in order to avoid prolonged litigation.

Update: We have also received a longer statement, although it also does not go into details:

“IN THE UNITED STATES DISTRICT COURT FOR THE DISTRICT OF MARYLAND

For the reasons stated in open court, it is this 10th day of December, 2009, by the United States District Court for the District of Maryland, ORDERED that:

1. Plaintiff’s motion for a preliminary injunction (paper 3) BE, and the same hereby IS, DENIED for the reasons stated in court; and,

2. The clerk will transmit copies of this Order to counsel for the parties.

Retrieved from "https://fallout.fandom.com/wiki/User_blog:Ausir/Interplay_wins_the_first_round_-_no_preliminary_injunction?oldid=1958998"
Community content is available under CC-BY-SA unless otherwise noted.