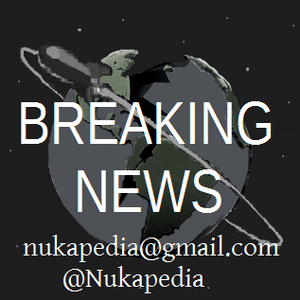 Welcome to another Nukapedia News Blast - where we continue our coverage of www.thesurvivor2299.com; a possible Fallout 4 teaser site.

The creator of these has confirmed that they are fake, and have no relation to the website. The Tumblr Account creator intends to restart the story of Ella Deux and Co in a few weeks. You can see all of that on our last blog

11/25 would be tomorrow in the US date format. Does this mean we can expect something tomorrow. We will keep you updated tomorrow with round the clock coverage.

From the official side

We're not calling this confirmed, as we're still short a smoking gun. For everyone who tells me X,Y or Z confirms its true, I have another telling me it confirms the opposite.

We'll have more coverage, as it happens - especially on the 25/11 and when the countdown hits zero. Thanks to Chris The Sayian, Peace n Hugs, and everyone who provides a comment

22:46, November 25, 2013 (UTC) One of our commenters adds this decode of a further message that appeared, but we haven't been able to independently verify the existence of the original, or the decode:

We can confirm after independently verifying ourselves that the European Fallout 4 Trademark has been withdrawn. There are now only Trademarks for "Fallout" and "Fallout: New Vegas".

CVG believe this to be in a series of fake submissions.

Its perhaps a little early to call it, but we're almost certain that the survivor site, as a result is fake. As you were.

Retrieved from "https://fallout.fandom.com/wiki/User_blog:Agent_c/Thesurvivor2299.com_watch_-_Trademark_apparently_fake?oldid=2035037"
Community content is available under CC-BY-SA unless otherwise noted.