Welcome to the Nukapedia News Digest. All we are sayyyyyyyyyy-ing, is give news a chance.

In your edition this week:

Quoting as an art 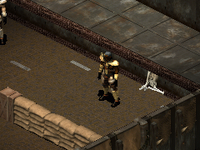 “That's far enough! I knew I smelled Brotherhood in the air. I've been studying up on you military types since I first heard you were sniffing around this region. But I gotta tell you, I aint impressed. What were you going to do anyway? Kill little old Gargantua? I don't think you even have enough ammo to piss me off! And wait, don't tell me! You're all little Initiates, aren't you? Haha! You mean to tell me that they couldn't even rustle up some Paladins to take me on? You know what that is? That's disrespect! Nobody, NOBODY disrespects me! I'm gunna do things to you that a lonely tribal wouldn't do to his neighbours brahmin! But don't worry, by that time you'll already be dead. You should've just walked away. Mwaahahahahaha.”— Tactics demo antagonizer Gargantua, when confronted with the Warrior.

Relic of the war that wasn't.

We’ll be back next week, in the meantime Shortlist have a Fallout 3 trivia quiz here.

Retrieved from "https://fallout.fandom.com/wiki/User_blog:Agent_c/Nukapedia_News_Digest_-_2_March_2014?oldid=2101463"
Community content is available under CC-BY-SA unless otherwise noted.