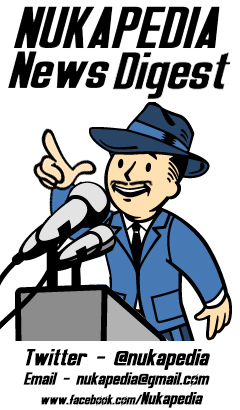 Welcome to the Nukapedia News Digest, brought to you by Deans Electronics - If you don't know Watt you're doing, pick up a copy of Dean's Electronics.

In your digest this week.

Just a heads up, you wont be seeing "MysteryStranger" around anymore... But you might see an admin called Energy X... Don't panic, there hasn't been a coup or secret vote, they are one and the same. As for why the change, I suppose its a bit of a mystery...

Its time to vote again

Should GhostAvatar have his keys to the Burecrat's office returned? Vote here before July 7.

News from the wastes

“One of the best perks of developing a game in independence is the ability to keep the workplace sane.”— Brian Fargo, Twitter

Here's a pick of Mark Morgan and Brian Fargo who met this week to work on Wasteland 2. Hard at work as always... 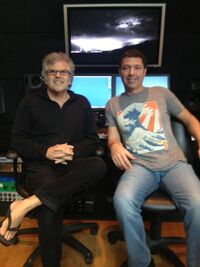 For those of you looking to get into sound and games, the pic was taken in Mark's studio.

Fans of Wasteland 2 have known for a while that the game that some (okay, probably just me) have dubbed "The best game ever, ever" is going to be built on the Unity engine. Unity have been talking up their engine, and you can read Ars' Technica's take here.

(Do any other Fallout 1 fans find themselves supressing a chuckle when they hear "Unity"?)

Thanks to those who suggested question ideas for the Community Interview with Chris Keenan. I've drawn upon the suggestions to complete 12 questions that we're eagerly awaiting a response on. We'll hopefully be posting those (and the answers) next week at both Wikis.

People who have visited my user page can guess about my love for Aviation... Leaving me ecstatic when Scarface11235 suggested the following Relic, the Convair X-6.

After World War 2, with the atom forevermore split; governments across the world began looking at possible uses for Nuclear power, and putting a nuclear reactor on a long distance bomber seemed to make sense - if done right such a craft could fly long distances with no need to refuel, handy for attacking enemy territory.

In 1952 the US Air Force began modifying a B-36 "Peacemaker" - an extremely large aircraft designed to carry nuclear weapons - it still carries the titles of largest piston-powered aeroplane ever, and largest wingspan of any combat aircraft ever (only cargo planes are bigger) - to fit a 3 Megawatt Nuclear Power plant. Although the plant was operational in flight, its role was not to power any of the aircrafts systems, only to allow for the engineers to see the potential challenges in keeping the crew safe in flight - 12 tonnes of Lead (of varying thickness for experimentation purposes.

Despite completing 215 hours over 46 test flights, the programme was discontinued before the stage of actually using Nuclear power in flight could be completed.

Our resident artist, Doc Incognito is back. Best known for his work during the Logo contest and for the moose you too can now commission one of his masterpieces. Check out his blog for more details and samples of his work.

Skype informs me that is the birthday of GarouxBloodline. Happy Birthday Leon.

Retrieved from "https://fallout.fandom.com/wiki/User_blog:Agent_c/Nukapedia_News_Digest_-_22_June_2012?oldid=1682576"
Community content is available under CC-BY-SA unless otherwise noted.