Hi Folks, in a news flash... Some buzz has been generated around following has been spotted at the US Patent and Trademark Office... 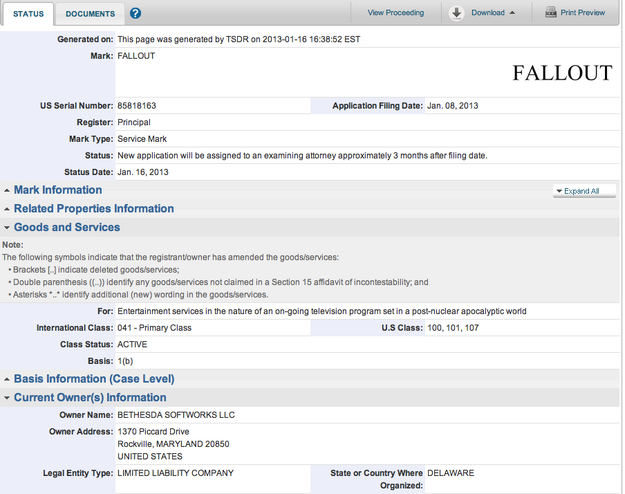 You can read the filing here.

However, don't get excited becuase it says "TV". This doesn't mean a TV series is definitely in the making, it could just mean that Bethesda/Zenimax feel the need to protect the brand in this area... In fact its not even the first time Bethesda has registered the Fallout mark for a TV series

The earlier filing is here. Further investigation on the USPTO site shows that this previous registration has been extended 5 times... (There's also an earlier expired registration for Laser disc, video tapes and Audio cassettes...)

Needless to say, not even a hint of a TV series being in development has appeared in the past 4 years (since original registration), beyond the trademark registration itself.

Looking further into this, the USPTO's website says that when a trademark is issued it either has to be used within 6 months , or a renewal requested if its never been used.

If a renewal is requested, the USPTO will agree to a maximum of 5.

Basically, looking at the evidence, it appears this just the old mark running out, and Bethesda moving to keep it.

Retrieved from "https://fallout.fandom.com/wiki/User_blog:Agent_c/Fallout_re-trademarked_for_a_TV_series%3F?oldid=1823071"
Community content is available under CC-BY-SA unless otherwise noted.