Vault17 has brought this to our attention! A countdown screen on the Bethesda Fallout homepage. Something big is expected to happen in less than 24 hours!

Some Breaking News about Fallout 4. videogamer.com is reporting that Mirada Studios has reportedly had a hand in the creation of a Fallout 4 trailer.

This leak comes through the linkedin profile of a 3D artist, who has listed Fallout 4 as the title he was working on.

Who is Mirada? They've created advertisements for the like of Walt Disney, the prologue of Pacific rim, and worked on Katy Perry's Dark Horse video. you can see a montage of their work here.

All of this points to an imminent Fallout 4 announcement being more likely.

Mirada has been asking media outlets to pull the story claiming that there has been a breach of a non disclosure agreement. It seems Mirada has inadvertently confirmed the story to be true. 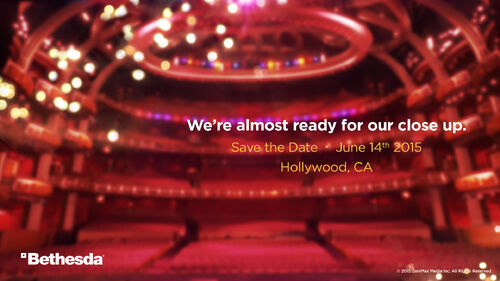 Well at least we know love is real, and have that confirmed...

Retrieved from "https://fallout.fandom.com/wiki/User_blog:Agent_c/Does_a_Fallout_4_trailer_exist%3F_(UPDATED)?oldid=2813712"
Community content is available under CC-BY-SA unless otherwise noted.