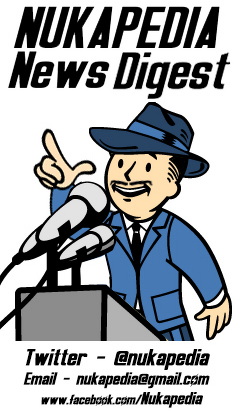 We interrupt your regularly scheduled apocalypse to bring you some breaking news.

The much maligned Project V13, once known as "Fallout Online" is not as dead as some feared. Eagle eyed spotters might have noticed that Interplay had left its release as TBA...

Well, here's the skinny on what Project V13 is going to be now...

Once you have determined your character's background, you will found your "colony". From a deserted city, a broken down military base, or even the ruins of an oil pumping station, the colony will be yours to rebuild and control. Attract non-player characters for guards, peons, scientists, and other activities. Or, if you are the type that so desires, shanghai the NPCs. Put them to work rebuilding your society and improving your colony.

Explore the world, meet friends, and fight your neighbors for control of resources. PV13 will be your chance to rebuild a devastated world.

Doesn't sound much like the MMOG that was promised, but colony/settlement building is a common suggestion in the threads.

I hate to editorialise, but I'm going to slap a great big "Buyer beware" on this. Here's some red flags for you:

About the Team
We're an experienced team of game developers. We love the post-apocalyptic genre and want to do something exciting with it. PV13 has been in development for years, but we've had to make some major changes recently. We believe the changes are for the better and we're excited about working on this new iteration of PV13.

Note the lack of names or detail.

And last, but certainly not least, the Top 20 Contributors. Those who really care enough to Save the World. Obviously the most Intelligent and Charming Visionaries among us. Those who should be honored by parades, statues, and overpriced stadiums.

We'll put them on the Hero board. It's the least we can do. But, surprise, we will do more.

Notice the lack of "Copy of the game" in any of the tiers.

This isn't a kickstarter, you aren't contributing to get an end product, you're contributing to help them develop a prototype only, they'll then be back for more cash once this is done. This is quite literally beg-ware - give us money so we can ask you for more money later.

They're making a prototype?

According to documents in the Beth v Interplay courtcase, Project V13 was playable (thanks to Masthead).

I have a feeling this is a sign that all of that work, at least as development goes, has been thrown away.

Those of you who watch the recent changes might have noticed me working on a rewrite of the Bethesda v Interplay court case. According to the original deal, the game should be almost done by now.

Eric Caen is the brother of Hearve Caen, the CEO of Interplay. This seems a bit of a conflict - have someone involved in the company donate high to encourage more to do it... Then again, if the CEO's brother can only manage $75....

Speaking of money, According to Thomas Bidaux a former employee of NCsoft, and now consultant to the online gaming industry, a MMORPG takes between 20-80 million dollars, depending on what quality you like. (pulled from his report in the Bethesda v Interplay case)

Interplay will use its good faith business efforts to launch the forum on or before the estimated date. However, You acknowledge and agree that delivery as of such date is not a promise by Interplay and that unforeseen events may extend the development and/or production time. Accordingly, You agree that any unearned portion of the deposit shall not be refundable until and unless Interplay has not launched the forum within 6 months after the estimated delivery date. If the BlackIsle.com/Project V13 forum is not launched within 6 months of January 30, 2013, then the unearned portion of Your pledge (i.e., that portion not spent on Game Costs) will be promptly refunded, less processing costs and third party fees.

Basically, Interplay don't promise to launch the top secret forum you're paying for access for, and if they don't you wont be getting all your money back. If they spend it all in the meantime... TS, you get nothing!

Well, I think that's enough alarm bells for now. If you want to contribute you can head on over to Black Isle's website.

If you'd like to support interplay, but actually want something for your money, can I suggest instead putting your money into Interplay shares. Interplay shares are currently trading at $US0.01. Note, this is not financial advice.