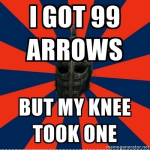 Tim to the Adams

Hi, my names Tim (as you can clearly see) and I contribute to this wiki when ever I see an abnormality such as spelling errors and false information. I love the Fallout universe as well as this wiki and I plan to seek out some of the bugs and exploits of both Fallout 3 and Fallout: New Vegas to an extent so that this website will be able to more accurately and precisely pinpoint the problems and the solutions of the two games listed above's articles and pages and fix any errors I see as I skim through the pages of this wiki. Also I'd like to point out that I have been banned from this website a total of three times so it would'nt be a surprise if I ended up getting banned forever so, if that were to ever happen I can be contacted at the Dead Island wiki or my Xbox LIVE gamertag.

Tribesman
The Prophet of Badassery

The Courier
The End
The Divide

About Me Part II The details of my life are quite inconsequential...very well, where do I begin? My father was a relentlessly self-improving boulangerie owner from Belgium with low grade narcolepsy and a penchant for buggery. My mother was a fifteen year old French prostitute named Chloe with webbed feet. My father would womanize, he would drink. He would make outrageous claims like he invented the question mark. Sometimes he would accuse chestnuts of being lazy. The sort of general malaise that only the genius possess and the insane lament. My childhood was typical. Summers in Rangoon, luge lessons. In the Spring we'd make meat helmets. When I was insolent I was place in a burlap bag and beaten with reeds- pretty standard really. At the age of twelve I received my first scribe. At the age of fourteen a Zoroastrian named Vilma ritualistically shaved my testicles. There really is nothing like a shorn scrotum...It's breathtaking-I highly suggest you try it.

Retrieved from "https://fallout.fandom.com/wiki/User:Tim_to_the_Adams?oldid=1941288"
Community content is available under CC-BY-SA unless otherwise noted.