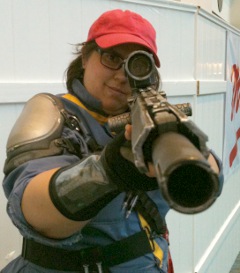 Good (No, really.)
“Hmmm... I'm about to go into a subterranean city inhabited entirely by children who hate adults... I need to be as likable as possible... (*Takes drugs, drinks a beer, puts on sexy negligee and a powdered wig*) Little Lamplight here I come!”

I'm only going to say this once... GIVE ME THE NAUGHTY NIGHTWEAR!

You know what I love? I love that the typos I make in image comments are saved FOREVER to preserve my shame.  :)

I was first introduced to the Fallout world by Fallout Tactics: Brotherhood of Steel, which many people (including some friends of mine) will tell you doesn't count having been made for Interplay Entertainment by Micro Forté. It has a number of differences like slightly more modern weapons, using ring pulls instead of bottle caps as money and a collection of Vault Boy images that didn't quite look like the Vault Boy of... Pretty much every other game. Not knowing enough about Fallouts 1 & 2 to snub this attempt to cash in on the "tactics" genre craze of the late 1990's, I was utterly charmed by the pop culture references and the dark sense of humor. If the "real" games were as superior as people kept whinging on about, this was something I really wanted to play.

When I heard that the franchise was purchased and being developed by Bethesda, I found it disappointing they weren't working in some way with Obsidian Entertainment. After getting a thumbs up from some of my friends who I consider more "experienced" Fallout fans, I did get Fallout 3 and I was pretty much obsessed from the get.

When New Vegas was announced I squee'd and obsessed over which pre-order pack I should get. (I went with Gamestop, which had the Classic Pack, and also there's a Gamestop literally across the street from me.) New Vegas has become my new favorite game of all time.

Retrieved from "https://fallout.fandom.com/wiki/User:TandyBomb?oldid=3056774"
Community content is available under CC-BY-SA unless otherwise noted.