“My name is Alexandra, I'm a sword and shield of Steel, SUBMIT!”— Alexandra while exterminating raiders in combat. 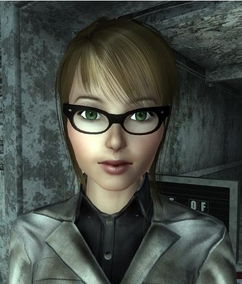 Alexandra Yoshino MacWayne was born in 2250. She is a member of Brotherhood of Steel in a Capital Wasteland. She was recruited by Brotherhood of Steel in 2267 at the age of 17 when she was rescued from Super Mutants. Her twin sister Atsuko, joined the BoS in 2268 after Alexandra was recruited last year. In 2276, after a huge argument between Lyons and Casdin. Henry Casdin, Rococo Rockfowl, Anne Marie Morgan, Atsuko and other BoS members seperated themselves from the chapter and formed an own squad called "The Outcasts". Alexandra asked Lyons what just happened about the argument after she overheard them last night but Lyons told her that he made a greatest mistake and furthermore shouldn't discuss it with him or any other members. However, when she found out that Atsuko and the other members went missing from the The Citadel, she asked Lyons what happened to them all. Lyons then told her that if she remembers the part where he ordered every BoS in the area to abandon collecting tech and start helping the Locals, Alexandra remembers it and figured it out that her sister, along with the others have deserted the chapter to continue the true mission, which saddens her that she will no longer see her sister, however Lyons told her if she wants to find her sister, to which Alexandra quickly replies that its better to help the people in the wastes rather than finding her sister........

In 2283 She formed her own squad called "Winter Brotherhood".

In 2300, She and her squad found a portal leading to Garden of Eden, which at some point they got trap in there for a few weeks until one of her Knights found another portal that leads to another unknown universe where the last dragonborn lives.

(*) While in Capital Wasteland (**) During her trip to Nevada

The Alexandra pictures that I use were all mine, please do not upload it anywhere else.

The weapons and armors were all mods, you will never find them anywhere in Fallout 3 and F:NV, with the exception of Desert Eagle since it exists in FO1, FO2, FO Tactics, and Fallout: BOS.

The background story of Alexandra is fake and not really a Fallout Canon and should not be part of it.

Also, the story is made up by me so DON'T copy it and take credit to itself as I will take action when I find out that you did it.

You can read my userpage, but your NOT ALLOWED to edit it, in such way of vandalizing and/or removing all contents from pages.

Alexandra's car from an alternate universe.

Alexandra launches the airstrike rockets towards the enemy base.

“I almost end up getting killed by those nasty raiders until the lone wanderer shows up out of nowhere, guess I was wrong about calling him a Local, he is my hero now.”— Alexandra after being saved by Lone wanderer.
“Great, just great, a trashy wastelander trying to get in my way. Speak to Sentinel Lyons, I'm just a Knight Captain.”— Alexandra meeting Lone wanderer for the first time .
“Mutants, never gets old, thats why they hired me and other bands of mercenaries to track their base and exterminate them.”— Alexandra]]
“Weird, is it just me or they're really intelligent, nah its the same one in DC, its just I've never seen that kind of frankenstein before.”— Alexandra first time seeing a Super Mutant in the Mojave.]]
“You have guardian angel, I don't care. I will just call an air support, that thing can remove obstacles.”— Alexandra]]
Fallout 3 / Broken Steel character 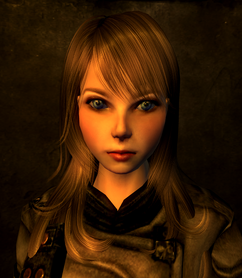 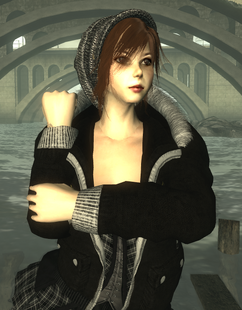 Between good and neutral

“Your love is my dream, come true”— Cassie's favorite quote.

Hi, my name is Cassandra (or you can just call me "Cassie"), I'm half British half Chinese. My first fallout games are Fallout 3 and New Vegas. I played them often and learning the game's storyline. One day, I hope to become a good editor and become a chat moderator on fallout wiki someday.

My former name here on wikia is Jarence chan

Retrieved from "https://fallout.fandom.com/wiki/User:T234LovelyCassie?oldid=2196483"
Community content is available under CC-BY-SA unless otherwise noted.