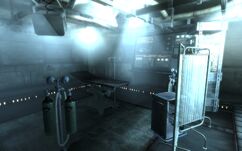 The Waters of Life
Finding the Garden of Eden
Take it Back!
Who Dares Wins

Phoenix is an experienced character that has extensive exposure to the wastes, and is known to have a penchant for energy weapons. His continued presence in the Capital Wasteland has been confirmed as of 2278.

He is believed to have served his Call of Duty in prior combat missions, before finding himself engaged in post-apocalyptic warfare. Bearing a distinct influence from his upbringing in the Great Southern Land, his arrival in DC was somewhat unexpected, and continues to cause great consternation for the few remaining Enclave forces, resident Super mutants, and Raiders. Talon Company mercs are rumored to have been despatched to eliminate the threat he poses to local instability, but have instead had their ranks decimated and have so far been unsuccessful with their attempts. It is suspected he may also have links with Three Dog of Galaxy News Radio.

Corroborated sightings have confirmed that he does not usually operate alone, but has a close association with former Citadel-based Brotherhood of Steel operative Star Paladin Cross. A dog has also been witnessed with them on occasion, but is noted to be regularly guarding a property at Megaton. Furthermore, in the midst of battle there have also been sketchy reports of an unnamed individual, whose identity is yet to be established, appearing and providing hard-hitting firepower support.

Phoenix appears only in Fallout 3.

Retrieved from "https://fallout.fandom.com/wiki/User:Ph03n1x?oldid=3110488"
Community content is available under CC-BY-SA unless otherwise noted.