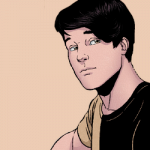 “Believe, believe, the Dragonborn comes...”
“Fraze is the bestest!”— Miss.Nicolle

You ever drink Bailey's out of a shoe?

John Veng-Shui is an exile living in the Mojave Wasteland in the year of 2282.

The former commander of the Wasenshi group in the Mojave, he lost his post and subsequently fled after failing to push the NCR away during Operation: Boulevard. Having his assets and land seized by the NCR, along with the majority of his forces and people that followed him, he was stuck in a river without a paddle and was forced into hiding.

Seeing his own efforts in the battle as defence and seeing the NCR's reaction as nothing short of cruel and selfish, being forced into hiding and having to watch his forces and civilians killed left him with a deep-seated hatred of the NCR's military. Viewing the civilians as little more than puppets forced into the service of a puppet master, his own views on how to remedy the situation have become more and more extreme judging and have evolved into nothing more than "cut the strings" in some cases. For John, this solution's meaning cannot be more literal.

Now, he continues to roam through the wastes maintaining his sense of honour and service, albeit a perverted one at this point. He makes periodic stops and locations that are assumed to be safe places that other survivors of the disatorous Operation gather, though Veng attends these meetings less and less, and keeps up with his former comrades less and less. Instead, he has been shown to be spending a worrying amount of time camping around the various locations that Caesar's Legion rest in, as their anti-NCR agenda is one that suits Veng's current mindset all too well.

Retrieved from "https://fallout.fandom.com/wiki/User:Mishaxhi?oldid=3071359"
Community content is available under CC-BY-SA unless otherwise noted.