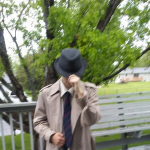 Hello I'm the LoneGunMenWander I've been apart of the wiki for about a year now I joined up back in May of 2016. My hobbies consist of playing video games, reading, looking of different types of cryptids, watching TV and movies, and writing short stories.

Anthony (Fallout 3) After growing up in Vault 101 for 19 years Anthony was forced to leave after his father left. Soon after Anthony agrees to help Moira Brown by getting supplies from the nearby Super-Duper Mart. Once Anthony reaches it is when his innocence of his former vault self began to fade. While trying to sneak through a raider spots him and jumps on top of Anthony trying to stab him. After a short struggle Anthony manages to take the knife away from the raider and kill him. Anthony is then horrified by what he had done unfortunately the struggle caused noise attracting the other raiders to his spot forcing him to kill them. After the onslaught Anthony realized that in order to survive he will have to kill people. His journey through the wasteland changed him greatly he went from a someone who would never get into a fight to someone who is quick to pull his gun and shoot. Being reunited with his father James did help him in some ways as some of his innocence did come back as he became more cool headed however the death of James changed him for the worse. After the events of Fallout 3 Anthony began seeing Sarah Lyons. The two ended up having a daughter named Catherine in honor of Anthony's mother. Out of fear that this would cause controversy among the Brotherhood, Catherine was kept quite and only Star-Paladin Cross, Fawkes, Charon, and Elder Lyons. Elder Lyons soon died of old age shortly after and Sarah took over. Somehow the Outcast found out about Catherine believing that the Brotherhood was trying to creat a Lyons line to make sure the Brotherhood would never return to their original mission. They soon sent men out to eliminate Anthony, Sarah, and Catherine so this would never happen. Sadly both Sarah and Paladin Cross died while pinned down by Outcast soldiers. Anthony was able to escape with Catherine with the help of Fawkes, Charon, and Dogmeat. Rumors hold that Anthony left the Capital Wasteland with Catherine to the Commonwealth hoping to find a better life for her.

Parted to the back

Retrieved from "https://fallout.fandom.com/wiki/User:LoneGunMenWander?oldid=2783063"
Community content is available under CC-BY-SA unless otherwise noted.