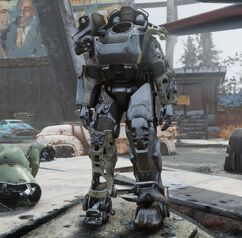 Power armor chassis with pieces of armor can be found throughout Appalachia. A full set never spawns; there will usually be two or three of the six armor pieces. There are two types of spawn points; the first will spawn with Raider power armor, the second will spawn with T-45 (most common), T-60 (next most common), or T-51 (least common). The armor pieces will all be of the same type and level. The armor pieces at the next spawn at a given location may be for the same set or may be a different level (and/or a different type for T-series armors). The power armor chassis always spawns with a fusion core. Some locations also have a power armor station and/or a nearby extra fusion core. Power armor can be mixed and matched, there is no advantage to a matched set except for the carry bonus on quest related Excavator power armor. Plans for crafting Raider, T-45, T-51, and T-60 power armors are so rare as to be almost non-existent. It is much easier to find the armor pieces than to find the plans.

Power armor has very little scrap or sale value, the chassis cannot be scrapped or sold. Players abandon power armor after finding more desirable pieces and these locations have sometimes been erroneously reported on other websites as spawn points. All locations listed here have been verified by multiple sightings.

Some spawn points are at named locations, some are not and are listed with the nearest named location. The power armor icon on the map images show the actual power armor location or the entrance to the building, mine, cave, or tunnel if the location is inside since the map marker does not move once a player character enters one of those areas.

Retrieved from "https://fallout.fandom.com/wiki/User:Lakewalker/Sandbox?oldid=3118946"
Community content is available under CC-BY-SA unless otherwise noted.