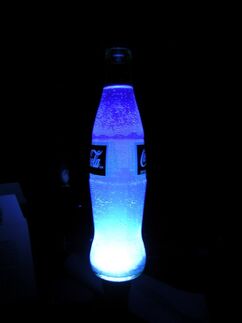 Hey there! I'm Kastera1000, but most people around here just call me Kastera or Kas. I'm a patroller and used to be an administrator here at Nukapedia.

I joined The Vault on February 27, 2010 when the wiki was still hosted by Wikia. Prior to that time, I edited articles as an unregistered member, only when I occasionally spotted something wrong or strange about them. I wasn't concerned with formatting or templates, but rather correct, useful information and grammatical errors. I started "seriously" editing The Vault in the latter part of the "Fallout 3 era" (2009 - 2010) of The Vault, so to my dismay, there were only a handful articles to truly contribute to, seeing as all other editors had got to them before I did. There was still tons to do on them, but with me being a new user, I was naive and didn't know any better.

After the release of Fallout: New Vegas, I found myself editing and creating more articles than I did during the Fallout 3 era. On April 2, 2011, I attained rollback status and have been using it basically every single day to revert both bad faith and all in all weird edits. About two months later, on June 21, 2011, I submitted my admin proposal and a week later (June 28, 2011), I was an administrator.

In November 2011, when The Vault moved to Curse, I went with like most other administrators, but also stayed here at Wikia to help during the transitional period. Although I didn't actively edit Nukapedia pages anymore, I tried to visit the site every day and see what was happening. I gave up my administrator privileges on March 22, 2014 after coming to grips that I wasn't helping Nukapedia grow as a wiki after The Vault (and I) left for Curse and I had not done anything that demanded administrative tools for quite some time. I'll still try to stick around to give site input – I'd like to think my opinion still counts for something – and swing into chat occasionally, but my days as an administrator are over.

Alongside normal Fallout wikis, I work as a bureaucrat at a sister site, Fallout Answers. This site addresses problems and queries encountered in Fallout games that are not directly addressed on wikis. If you experience any problems while you're there, feel free to let me know. I am also an active member at the Fallout Roleplaying wiki, where users from this community can come together and roleplay their own custom and fleshed out characters in a Fallout setting.

Retrieved from "https://fallout.fandom.com/wiki/User:Kastera1000-fduser?oldid=3278552"
Community content is available under CC-BY-SA unless otherwise noted.