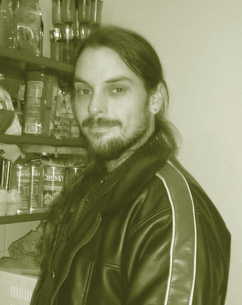 “Give me a rusty nail and a bottle of Rot Gut and I'll make you the best cocktail the wastes have ever seen.”— Johnny Trash

Johnny Trash is an irreverent hobo who plies his scrap-selling trade between The Den and New Reno.

Variously described as an asshole, a predator and a filthy gritsucker, Johnny has one of the few remaining guitars in the wasteland. While at various points, the neck, the body, the strings and the head have required replacement, it is never-the-less still the same guitar.

Johnny was born in the otherwise undiscovered Vault 22, where he was reviled as a reprobate and anti-social collector of broken machinery. After being exiled from the vault for trying to replace the water chip with a fuse wire from a Vault-tec Personal Grooming Device, Johnny swiftly ended up in New Reno where he became a junkie.

Since even the toughest wastelander can only survive a short period of brahmin-dung fueled chaos, Johnny realised he had to make something of himself. Digging into the piles of junk that feature on almost every corner in the city, he found enough crap to turn a profit when he got to The Den. From there, a wasteland legend was born, and Johnny became an ever-present feature on the West Coast.

Long-haired and usually bearded, Johnny is swiftly identified by his fondness for pleather, which he claims is a material made from the skin of the now-extinct 'Plains Sofa' which he assumes was a creature similar to a brahmin. Carrying a large sack of assorted garbage on his back wherever he goes and accompanied by a mangy dog, Johnny is almost constantly on the move between cities, treading the dusty wastes in his disgusting old boots.

He was named after a countr y and western singer whose heart-wrenching ballad "Apocalypse Vault Blues" became an anthem for the downtrodden of the wastes.

I hear the bombs a fallin'
World's coming to an end,
And I wont see the sunshine,
Not even once again,
I'm stuck in Vault 22,
Everything above is through,
But those bombs keep a comin'
I'm locked in my new home.

When I was still quite young,
My Overseer told me, "Son,
You'll have to go above,
'Neath that vicious Sun,"
I shot a man in New Reno,
Just to watch him die,
I see what Renesco's selling,
and give it all a try.

I bet there's rich folks living,
Way down in NCR,
They're probably drinking Rot Gut,
And popping palms of Mentats,
But I know what I have coming,
I know it won't be free,
But that Jet keeps me a-movin',
Even as its killing me.

Well, when they freed me from that prison,
Water chip to find,
I thought I'd see it through,
Follow the whole quest line,
Far from Vault 22,
That's where I want to play,
And I'd bet that Overseer,
Knows I'm here to stay.

Retrieved from "https://fallout.fandom.com/wiki/User:Ishotamaninnewreno?oldid=2702052"
Community content is available under CC-BY-SA unless otherwise noted.