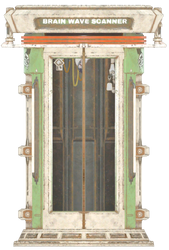 The Neural Oscillation Scanner is a piece of pre-War medical technology.

An experimental and ultimately failed device created by West Tek in Appalachia before the Great War. Its original intent was to copy the consciousness of a human being to be implanted as the AI component of the Robobrain series of robots. However, human trials encountered moderate difficulties when 30 West Tek interns had their personalities wiped in the first round of human trials. These interns were later transferred to the Charleston DMV.[1] After 10 similarly failed human trials, it was determined that there were simply not enough DMVs in West Virginia to continue. The original project was scrapped in favor of the much more practical Sympto-Matic, which could simply remove an intact human brain to be implanted in a Robobrain host body.[2]

The Neural Oscillation Scanner is unused and appears only in a developer test cell in Fallout 76.