THIS USER PRETTY MUCH LOST ALL INTERNET ACCESS!IF POSSIBLE I WILL CHECK IN AS FREQUENTLY AS POSSIBLE BUT FOR NOW THAT IS NOT AN OPTION.SORRY. 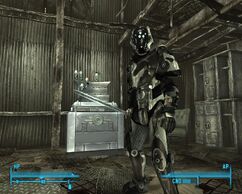 Born on July 2,2057,Huang Lee was the youngest bomber involved with the Nuclear Holocaust of 2077.Huang was absoulutely WASTED on the suicide flight to DC to bomb the white house. Stoned on a few hundred gallons of Whiskey,Huang Lee's nuke dropping super plane missed it's destination and crahed outside of Springvale,later becoming Megaton.Huang wondered the wastes until 2275 when he found Horace Pinkerton whom he threatened at gun point and forced to preform surgery to make Huang into a caucasion human being.And in 2276,after years of attempting at getting good karma,Huang(better known as Tiberius Carmine at the time) joined the Regulators.

Alright,there's a special weapon I want:a .44,one witout a scope.I hear that there's a guy in some radioactive pit near the MPDL-14 place.Get it for me.(this mission leads into the Mothership Zeta DLC) Reward:Executioner perk:Give +10 to any melee weapon with a blade.Exactly WHY you get this perk is unrevealed.

A rock in a hard placeEdit

There's a rock in my shoe.Get it out and I'll give you some caps.Reward:25 caps and a random amount of XP

Fuck You, hackers: A debate with DouchebagsEdit

Quote of the day Edit

Retrieved from "https://fallout.fandom.com/wiki/User:HuangLee?oldid=2201135"
Community content is available under CC-BY-SA unless otherwise noted.