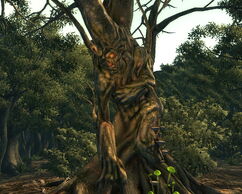 “Be Kind to the Smoothskins. One Saved the world once. 'Course, they broke it to start with.”

Harold is a very special mutation - originally a human from Vault 29, he was exposed to F.E.V. during an exploration of a military base called Mariposa. Initially, he mutated into what looked like an ordinary ghoul, and later distinguished only by a tree growing out of his head. By 2277, he is but a gnarled face in a tree growing in the Oasis Grove. During his many adventures, he has encountered such influential people as Richard Grey, the Vault Dweller, the Chosen One and the Lone Wanderer.

Harold was born in 2072, and was only five years old when the Great War occurred and he was forcibly locked in Vault 29[1].

Vault 29, as part of the Vault Behavioral Project, was actually host to a sinister social experiment. Harold was separated from his parents and raised by Diana, a human brain connected to a supercomputer, who posed as a goddess to the Vault's inhabitants. In cases of population unrest a test subject would be chosen to be released from the Vault early. The subject would return and tell the Vault dwellers the condition of the world outside and whether or not it was safe to leave the Vault. Of course, the test subjects would never return and this fact would deter anyone leaving again for a while.

Harold was one such subject, selected in 2090. He was released from the Vault, stunned by the security system, and picked up by a robot to be taken to the Nursery, where Diana resided. At the nursery he was given the choice of staying with Diana or exploring the outside world. However, if he chose to explore, she would have to 'condition' him so that he could not reveal anything about her or the nursery to the world.

Harold agreed to stay with Diana but managed to escape. During his travels he kept the Nursery a secret because he felt it was his duty to the world to keep such a future 'gift' intact until the world was ready for it[2].

After leaving his home Vault, he began a successful career as a trader and merchant, venturing across the wastes. As he became an important player in the Hub, he began to notice the increasing frequency of mutant animals attacking his caravans. Frustrated, he decided track the mutant source. He joined forces with Richard Grey, a scientist who was equally perplexed by the strange mutants, and went on an expedition to find it, eventually discovering an old military base.

Inside, most of them found death, killed by all the mutants that littered the base as well as its automated security systems. Harold, Grey, and a few others made it fairly deep into the base, where they found immense vats filled with a strange thick, green solution that seemed to be mutating the animals. A large robotic arm knocked Grey into a vat, where Harold assumed he died, and Harold himself was knocked unconscious. He awoke some time later out in the desert, already starting to mutate. A caravan eventually found him and brought him back to the Hub, where he settled into a destitute existence.

A mutant down on his luck[edit | edit source]

It was in the Hub, specifically, Oldtown, where he first met the Vault Dweller. In exchange for some money, Harold provided the Vault Dweller with a great deal information, mostly about the War and his adventures, as well as on the deathclaw that was harassing the Far Go Traders. With the help of the Vault Dweller, Old Harold brought the ghoul population of the Hub into equality with the humans. The two sides worked together, and the Hub prospered.

Sometime between 2162 and 2242, a small tree (which he calls Bob, although he likes to joke that his name is Herbert) began to grow out of the side of Harold's head, showing that even the sterile mutants can be the source of some kind of life. It is an entirely new species of tree - unique and special, just like Harold.

After the destruction of the Master's army, Harold left the Hub to become a traveller. He visited the ghoul city of Los around 2208, and also Carbon, Texas. There, he had a sexual encounter with Ruby, losing a hand, a toe and an eye in the process. Harold's travels ended in Gecko in 2241.

After the destruction of Necropolis, most of the ghoul population of the town migrated far north to form a settlement around an old nuclear power plant built by Poseidon Oil before the war. Anyone else would likely be killed by long term exposure to radiation, but the ghouls just find it pleasant. When Harold arrived, the plant was being run dangerously and stupidly. Harold quickly took over from the well-meaning but inept leaders of Gecko and got the reactor into some kind of working order. When the Chosen One arrived in Gecko, Harold asked him to help fix the reactor, although it is unknown if he succeeded, as doing so would have required securing the aid of xenophobic Vault City officials for the ghoul community, which at the time would have been no mean feat.

The Chosen One still heard mention of Harold from time to time. Apparently, the tree growing from his head had gotten larger, and if rumors are to be believed, fruit was growing from it. The seeds were said to be remarkably resilient, and several of them had taken root even in the most barren stretches of the wasteland.

By 2253, Harold was ill. The tree in his head had developed an unknown disease and was dying. Much to his surprise, Harold found himself affected as well. He didn't think he was going to die, but still... he just didn't feel right in the head.

So, he set out on a quest for a cure. Naturally, he didn't have an easy time of it either. People just didn't seem to want a ghoul around any more. But, Harold didn't let that stop him. He persisted in his quest until he came upon the Twin Mothers tribe.

Much to his surprise the tribe took him in and accepted him as he was. He explained his quest to the tribal leaders and was told that they would consult their goddess. Days later, Harold was approached by the tribal shaman and given a potion to drink. It was a foul concoction, but it worked. Bob got better and was happy again.

Harold couldn't let such a good deed go unrewarded so he offered to help the tribe in any way that he could. They smiled at him, thanked him, but declined his help. "The goddess will provide," they always said. Harold, nice ghoul that he is, said that he would like to pay his respects to the goddess. He was taken to the tribal shrine and granted a private audience. He wasn't really surprised when the projected image of a woman appeared before him, but he was taken aback when she told him where he could find her.

Harold returned to the Nursery and has been there ever since. He considered settling down and spending the remainder of his days, however long that may be, in the tranquillity of the gardens, but eventually decided against it and travelled east.

Harold's travels eventually took him to the Capital Wasteland, where he found himself overwhelmed by the growth of Bob and became stuck, rooted to the ground. Here he was discovered by several people who began to worship him as a god, and a small and exclusive cult known as the Treeminders began to form in secrecy. Bob began to blossom and many plants grew in this area, which became green with life, a stark contrast to the otherwise barren Capital Wasteland. During this period, Harold developed an alarmingly powerful mutation which enabled him to "see" the area around Oasis, through the very trees that came from Bob's seeds.

He would go on to use this ability to bring in wanderers, all the while hoping one of them would put an end to his troubles - unfortunately, the Treeminders' strange ways and insistence on using an intoxicating, potentially poisonous sap (as a "purification" ceremony) drove off most of them, many in worse mental shape than they were prior. His persistence would pay off when the Lone Wanderer came into view - on his orders, the Treeminders allowed the wanderer safe passage into Oasis.

Harold doesn't get up to much in his day-to-day business, being fused to the ground. He can sometimes be seen chatting with Sapling Yew, a child of whom he is particularly fond.

Harold reveals his true identity to the Wanderer, and begs for mercy; after being stuck in the same position for decades he is eager for death. The other dwellers of Oasis either ignore or, in their religious fanaticism, interpret Harold's wishes as a moral and spiritual test, much to Harold's chagrin - thus his only recourse is to ask the Lone Wanderer to take his life. However, as always, there are competing interests at play. The leader of the cult wishes to keep Harold alive and safe, a secret for only Oasis, whereas his wife wishes for his gift to be shared and spread throughout the wasteland.

It is left to the Lone Wanderer whether to carry out Harold's wish of death or assist the cultists. A player with a high speech skill can convince Harold that he has a gift and his continued existence will vastly improve the lives of others. He will reconsider his wish for death and find a new reason to live. Of course, the Lone Wanderer can also just set about him with a flamethrower and bring him to a more painful and violent death than even he had hoped.

Harold appears in Fallout, Fallout 2, Fallout: Brotherhood of Steel. A ghoul named "Harold" with a tree growing out of his head appears in Fallout Tactics, although it is unclear whether this is actually the Harold we all know and love or simply a homage.

Additionally, Harold was to appear in both Black Isle's cancelled Fallout 3 and Interplay's Fallout: Brotherhood of Steel 2. A cult called the Church of Harold is set to appear in Fallout Online.

Bad disposition.
Add a photo to this gallery

Bad disposition.
Add a photo to this gallery