Norwegian Fallout aficionado since picking up the first one in 2000. I must have played through Fallout at least seven times just trying out different things.

I'm doing a little editing here from time to time.

The first time I played Fallout 3, I wanted to explore the world for myself so I didn't look at any walkthroughs or character templates.

I want to get a speed run done in less than two hours without using glitches (unless you consider going straight to Vault 112 a glitch).

I've had two tries so far, one of them as a pacifist. My record so far is 3 hours 6 minutes - Maybe I'll turn off HDR next time ;-)

This is a build I used on my second play-through for a do-everything game with maxed skills.

The very first thing I did after exiting Vault 101 was swim to Rivet City to get the Intelligence Bobblehead for that one extra skill point level 3 onwards. I didn't read any skill books until getting the Comprehension perk at level 4.

With the Bobbleheads and all the skill books, you get around 60 points (56 in barter) for free in each skill, so you only need to get each skill to 40 with skill points to eventually get to 100. I suggest keeping a list of how many points you have put into each skill if you want to maximize, since there's no way of getting that information from the game later, except from a general "Skill books read", which doesn't say much of anything. This made me just barely get to 100 in barter (I think it was on the exact point). It's easy to forget how many points went where, so keep a tab...

I gave tough answers to Moira to get the damage resistance bonus. I picked Ant Sight as a reward for Those!
I made sure to pick up the Lucky 8-ball and Yew's bear charm.

A female character with Black Widow will be able to deal out more damage since most combat is with males.
Do not get the attribute Bobbleheads until you get Almost Perfect at level 30, you will lose the chance to get an even 10 if you do.

There are 1300 skill points total, 100 points in each of the thirteen skills. At IN 4 you will get 14 skill points to distribute at each level. That's 406 points throughout the game. There are 646 points to be gained from reading skill books - which totals 1052. The Bobbleheads will give an additional 130 points - 1182. Maxing out your attributes gives 396 points, bringing the total to 1578. Skill boosts from perks/items give 39 points, bringing the total to 1617 points - 317 points in surplus.

In addition you can neglect putting points into Big Guns and Science, since you can get unlimited skill books for those two skills.

This means you only have to pick up just over half the skill books to reach 100 in all skills.

With 29 perks I found it difficult to pick the final ones, I opted for Chemist/Chem Resistant instead of two ranks of Animal Friend. It's nice to run around the wasteland mostly uninterrupted, but it means you will get considerably less XP.

If anyone has any suggestions, please leave feedback...

This is a very different character from the one above. It focuses mainly on perks that require luck, charisma and intelligence. It's designed to get most out of the roleplaying aspect of the game, but it will not perform as well in combat. The game will still be relatively easy, Fallout 3 isn't a hard game.

She's female so she can pick Black Widow, there's more male than female characters in the game. She keeps a neutral alignment so she can get Sergeant RL-3 or Butch as her follower. She keeps Dogmeat around for additional protection. Animal Friend will make travelling in the wasteland a lot faster, since you won't get attacked as often. On rare occasions she gets help from the mysterious stranger. With Entomologist and Robotics Expert she deals more damage to respectively, insects and robots.

Lead Belly, Life Giver and Solar Powered will keep her health up.

Equipped with A3-21's Plasma Rifle, she can still hold her own in a fight but she might need a few more shots to pull it off. Fortunately she has Fortune Finder and Scrounger, so she'll find more bottle caps and ammunition than she normally would. 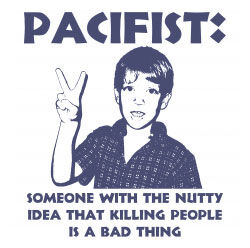 The point of this character is to get through the game without killing anything except the one Radroach you have to kill at age 10. The only important parts are to get Barter and Science up to 50% and to pick the Child at Heart perk, the rest is arbitrary.

The goal here is to get through the game with just killing one creature: the Radroach you have to kill at age 10. This isn't as hard as it sounds... I tagged Barter and Science since you need those skills later to recruit Charon and to hack the computer to get into Vault 87. You need to get those to 50 as soon as possible. Medicine is nice to have since it increases the benefit from using stimpaks. Those are the only important ones, if you want, put some points into Speech as well. You need the Child at Heart perk to get into Little Lamplight. A nice way to save on stimpaks is to drink from various sinks you encounter to heal.

At age 16, pick up the Bobblehead - Medicine from your dad's desk. Tell the teacher you're sick so he'll let you fill out the G.O.A.T. yourself. Start the escape from Vault 101 by grabbing all the stuff from your room. Then just run through the whole thing, picking up loot from the following places: In the room where the Overseer interrogates Amata, in the Overseer's office (the same locker you get his password from) and from the rooms close to the Vault exit.

After you exit the Vault go straight to Springvale and get loot from the mailboxes there, and go talk to Silver to get 400 caps from her. Now set a map marker to Smith Casey's Garage. Three squares from the left, and five squares from the bottom on the world map. On your way there, you'll get to the Jury Street Metro Station. Go to Gold Ribbon Grocers and set off the reaction there. Get the various loot (Mini Nuke, Missiles and skill books) and the Abraxo Cleaner and Sugarbombs packages.

Continue towards the garage, but make a stop to trade with a caravan just east of Evergreen Mills. Once at the garage, get the gun and the stimpaks before entering Vault 112. Put on the jumpsuit and sit in a Tranquility Lounger to enter the simulation. Go straight to the abandoned house to your left to activate the "Fail Safe" solution (Radio, Glass, Gnome, Glass, Cinder, Gnome, Bottle). Exit the simulation. Talk to your dad, exit the garage and fast travel to Springvale. Swim down the river towards Rivet City. Make a stop at the bridge to Anchorage Memorial to pick up the frag mines there (more loot). You'll find yourself getting minor radiation sickness from the swim, but it's not too bad.

Make your way to the Rivet City science lab, once there, exit the room and re-enter to make your dad approach Dr. Li faster. Talk to your dad, don't wait for him to finish talking to Li. Pick up the Bobblehead - Intelligence on the desk. Now, take a detour to the Underworld to recruit Charon so he can do some dirty work for you. Go from Rivet City to Anacostia Crossing station. There's a lot of raiders here, so just jump off the railing to the north and make your way to the exit to Museum station. At Museum station, make your way to the west exit to the Mall. This puts you right outside the Museum of American History. Go to the Underworld and trade with Tulip, Doctor Barrows and Ahzrukhal to get the 1000 caps you need to buy Charon's contract. Loot Ahzrukhal after Charon kills him and get the stuff from his refrigerator. Use any excess caps to buy Stimpaks and a radiation cure from Doctor Barrows.

If one were to get into semantics, one could say getting Charon to do the killing for you isn't true pacifism at all, since the Lone Wanderer would know what was going to happen and would abhor the use of violence. Oh well.

Now fast travel back to Rivet City and head towards the Jefferson Memorial. Stay back and let Charon do the killing. Your dad will tell you to go make sure it's safe to enter, so bring Charon inside to make sure of that (you can dismiss Charon after he has cleared out the Memorial since you have the stimpaks, or you can just have him tag along as a bodyguard). Do the various errands for your dad and when the Enclave show up, get Charon to kill a few of them and equip him with their armor. You want to make sure the Enclave Soldier who is next to the exit to the Taft Tunnels is dead, or else Dr. Li will get confused later and run all over the place. Go to the Rotunda, watch your dad die and then help Dr. Li escape. Talk to her when you're inside the tunnels so she will follow you. When asked, you can let Garza have 5 stimpaks, or not. It won't affect karma if you leave him behind.

Once at the Citadel, talk to Rothchild and then go look at the Vault-Tec terminal to learn that there's a G.E.C.K. at Vault 87. Go talk to him again to get the map marker to Little Lamplight. Now fast travel back to Smith Casey's Garage, and walk to Little Lamplight. Use Child at Heart to get in. Talk to Mayor MacCready and ask him if Murder Pass is the only way to get into Vault 87. He'll tell you about the computer. Find Joseph (he's often down by the water in the Great Chamber) and get him to power up the computer for you. Then hack it and enter the Vault.

Now either have Charon kill the mutants for you, or if you dismissed him, run through the Vault using stimpaks as needed to get to the Test Labs. Once there, free Fawkes and follow him to the place where the G.E.C.K. is. Have him retrieve it for you. Go and get captured by the Enclave.

At Raven Rock, be rude to Colonel Autumn, then get your belongings from the locker. Go east from your cell to avoid the officer. Make your way to President Eden. Talk to him any way you like and get the FEV vial so you can exit the base. Once outside, you can recruit Fawkes if you want. It's not necessary to do so though. Fast travel back to the Citadel then talk to Elder Lyons and his daughter to start the final assault with Liberty Prime.

Make your way back into the Rotunda and then either let Colonel Autumn go, or let your followers take care of him for you. Then finish the game by sacrificing yourself or Sentinel Lyons.

I had 39 stimpaks left when I finished the game. Stimpaks are more important if you choose to dismiss Charon after he clears out Jefferson Memorial - or if you are doing a non-pacifist speedrun, in which case you wouldn't recruit Charon at all since it wastes time.

If you choose to skip recruiting Charon altogether and go for a non-pacifist approach, you should tag Small Guns instead of Barter. It should then be easy to clean out the mutants inside Jefferson Memorial with a combination of using the mines from the bridge and shooting them.