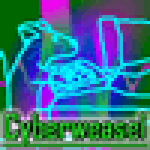 I've played Fallout since Fallout 1 first came out. Even played Tactics even though I suck at tactics games. The Bawls in Fallout: Brotherhood of Steel was significantly disappointing and has caused me to hold a grudge against the drink ever since. Cried when Black Isle went under, but was glad Bethesda continued the series, albeit Fallout 3 lacked a lot of what I loved about Fallout 1 and 2. I mean, there weren't even Super Stimpaks! Fallout: New Vegas was a significant step up, having been created guys from Black Isle in a new company.

My favorite pairing, which I came up with myself, for Fallout: New Vegas is Boone x Cass. I know she's about ten years older than him, but... hey, love doesn't judge, baby.

I know he's a wimp, but I'm also a bit of a fan of Deputy Beagle because of his eloquent manner of speech. X3

My favorite companions from Fallout 2 were Skynet, Marcus, and Goris. I was psyched Marcus made it into Fallout: New Vegas, and with his original voice actor! The HAWTEST guy in Fallout history, however, is Charon from Fallout 3. Yes, I'm a Charon fangirl. So sue me.

I have Asperger Syndrome and ADHD, so I can be quite the little fountain of energy. But that also means I have no filter and next to no social awareness. If I say anything, anything at all, offensive, know that I didn't mean it and I'm not aware what I said was offensive. Just let me know when I do something like that so I can learn, and I'll love you forever.

Some other favorite games of mine are Mass Effect, the Tales series, and The Legend of Zelda series. I also dabble in both Mario and Sonic games, but I must admit the latter is far too fast-paced for me.

Where You Can Find Me Edit

I'm on DeviantART as well, username Cyberweasel89. I don't draw, though. I just appreciate the art.

I roleplay on GaiaOnline (or used to), username Cyberweasel89.

In case you haven't figured it out yet, if you see a Cyberweasel89 anywhere, you can bet it's me.

The only exception is Danbooru, where I'm OrigamiChimera. And only because I forgot the password to my Cyberweasel89 account. XP

Retrieved from "https://fallout.fandom.com/wiki/User:Cyberweasel89?oldid=2488535"
Community content is available under CC-BY-SA unless otherwise noted.