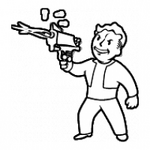 Perfectionist
Leaders voice
Wasteland Justice
“Deathclaws have a month dedicated to him. He snipes Talon Company mercs and slavers with a .308 sniper rifle while he is dressed as Abraham Lincoln. Three Dog is a close friend of his. He is the most interesting Fallout player”— Lucas Simms

Little is known about Chief editor 13 before his young adult life, but what people do know is that he came from the depths of the internet, seeking to create a new world and that world was Fallout. Since his first purchase of Fallout 3, Chief has been roaming the wastes to look for new content, oddities, and pictures to add to "the vault".

Chief can now be found in the roaming the Mojave wastes, discovering new glitches, bugs, areas and expanding the inventories for the vault.

Over time, our ragtag group turned into a wiki. I became obsessed with fallout.

We founded the Vault, beyond the great chasms of the internet. It is a secure wiki thanks to our admins hard work. We would send scouts back into the worlds of fallout, to help others who thought like ourselves, and that shows no signs of ending. I often wonder what Fallout 3 and its DLC would be like if Van buren were ever released, but I never had the time to think about that, as I still wander the Capital wasteland and the Mojave from time to time.

The others taught me the skills I would need to edit and expand our articles. Linking, to lead us into new pages. Starting a new page to inform the community of the ever growing world of Fallout. Deleting false info and blocking anons to protect what was ours.

Jspoel, Cartman!, Kastera and Ghostavatar made the wikia. The wiki grew, and grew strong with their help. But all things come to an end. Our new generation users, such as myself and Throbz, are now editors. I'm sure that the wiki will continue to grow strong under the leadership of our new users.

My love for Fallout will never perish, and not a day goes by that I do not regret picking up that box for Fallout 3. I see it everytime I click on the repair button in my inventory. This journal is our legacy to them, to their children, and to the rest of the wiki. That is my story, and I am sticking to it.

Why the Capital Wasteland is the new CaliforniaEdit

When I say the new California, I mean when the Vipers, Jackals and Khans were still strong, the NCR was just getting started, tribals were the only decent people that weren't in vaults and the Vault Dweller was just stepping out of Vault 13. I have never played the original Fallout or Fallout 2, but from what I've read here on the Vault, California is practically a Amusement park when we get to Fallout: New Vegas compared to what it was in the Original fallout. Don't get me wrong, I love Fallout: New Vegas, but the Damage Threshold feature is annoying and you can't ever replace Three Dog.

The atmosphere just feels more like a Fallout game should be. The weapons have a "feel" that goes well with their design. And the person that made the sounds for the weapons and thought of using 40's era music needs a promotion and a raise. The settlements themes are well thought out but aren't tacky or too bold. The restored Tenpenny Tower looks like what a building that's two centuries old that's been through nuclear armageddon should. Megaton is one of the most interesting places I've seen in a video game and has an equally interesting back story. The Washington, D.C. area looks like a real war torn area. The list can go on and on about how creative the locations are.

The colorful characters the player encounters is a staple of the Fallout series and Fallout 3 is no exception. Cerberus is a ghoul hating mister gutsy who is forced to think otherwise because of his programming, creating a internal battle which provides a hilarious conversation. Then Harold, who has appeared in every other fallout game, is present. And of course, who could forget Three Dog, the voice of the Capital Wasteland and Disc jockey is your own personal commentator while adding in his own flavor about your actions. Much like the locations, you could go on all day about the characters.

The story is what every Fallout should be, a vault member setting out on a simple journey, progressively becoming more complex. The story itself is original without being too crazy and gives little hints to the end without telling what it is.

I love the how the karma system works and it doesn't feel tacked on at the last minute but does not steer you in any direction, making the choice ultimately yours. While the faction system in Fallout: New Vegas does work, it doesn't work as well as the karma system. You simply either do quests to gain likability with one faction or to gain infamy with another faction. It seems more like a chore then a feature. The karma system may seem simple at first, the choices you have to quickly dispel this notion. You have to either choose between the reward or the right morale decision.

Their is just a good general feel of progression as you see your character first wearing Vault 101 security armor and carrying a 10mm pistol, to wearing an Armored Vault 101 jumpsuit and picking up a .32 hunting rifle, eventually equiping a suit of Leather armor and finding a R91 assault rifle and finally, a classic set of Combat armor and the powerful Chinese assault rifle. The progression isn't forced onto you but you are limited in your own characters abilities. Their is just a sense of progression that Fallout: New Vegas lacks.

Yes, many say its a bit on the easy side and I do agree somewhat, and yes it does seem a little ridiculous you can carry a small armory with you and carry thousands of round for each gun, but those are small complaints. Besides, realism is not what you're going to find in Fallout. But the total package, with or without the DLC, as a whole, is superb. No game is perfect, Fallout especially. But lets face it, we all squealed with glee when we saw that E3 trailer for Fallout 3.

“Just putting this out there, boss: if these Super mutants kidnap us and force us to fix toasters for them, it's on you”— What Raul says as you walk into Jacobstown.

“If your planning to take Veronica with you be sure to take a good pair of ear plugs with you. I'm kidding Veronica, put the power fist down!”— A Paladin on Veronica.
“Angry soldier robots with bazookas. I'm sure they'll be a good police force.”— Raul on the MKII Securitrons

Rex and his tv.

Beagle, get down from there.

Why is there a brahmin on the strip?
Add an image to this gallery
Retrieved from "https://fallout.fandom.com/wiki/User:Chief_editor_13?oldid=1991851"
Community content is available under CC-BY-SA unless otherwise noted.