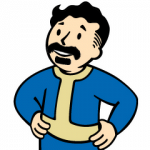 Post-apocalyptic greetings to all of you!! I'm a fan of the series who - sadly - was introduced late to them through the Fallout 3 GOTY edition back in late 2009... Yeah I know!

Since then I've been an avid affectionado of using this site, due to the fact that I'm a very completionist gamer and therefore I play very slowly and has to this day not fully played through my first character of Fallout 3. I delve into the universe each time I load up my game and savor each moment of decisionmaking and - in general - exposion to the lore and universe of the Fallout series. This wiki has therefore been where I've spent many, many hours reading about the characters which I'd just been meeting in the game. This 'unfolding' of the Fallout universe is what really took me in.

Anyway, it's all in good fun so I'd like to share some videos from a person who really makes funny versions of the story which we all enjoyed so much. His name is agrmonster and he makes use of the Fallout 3 game console to invent the most hilarious Falloutrelated content out there! Agrmonster's YouTube channel

Retrieved from "https://fallout.fandom.com/wiki/User:BusinessMonkey?oldid=1737097"
Community content is available under CC-BY-SA unless otherwise noted.