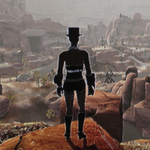 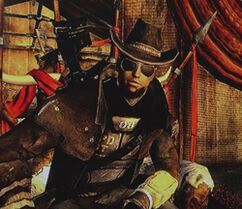 For the Republic, Part 2

bOnEs is a living legend in the Mojave Wasteland in 2281.

bOnEs is wandering peacemaker of the Mojave Wasteland, mostly fighting alongside the New California Republic. He's spent the majority of his time in the Mojave, befriending all walks of life in hopes of unifying the Mojave under the sign of the two-headed bear. He is well respected amongst all factions, except for Caesar's Legion, and is considered a living legend of the Mojave. Even Legate Lanius himself fears their inevitable encounter at the second battle of Hoover Dam. bOnEs has helped strengthen the NCR's vision of a democratic wasteland with the positive influence he has on those he encounters. These are the traits that made him legendary by all and feared by the Legion.

Nowadays, bOnEs can be found wandering around Novac, swapping tales of the wasteland with traveling merchants and the occasional wanderer. If you exhaust his dialog and pass a 75 Speech check, you can unlock an unmarked quest of his. It leads to a weapons stash in an unmarked cave near Black Mountain.

bOnEs does not appear in Fallout: New Vegas.

Retrieved from "https://fallout.fandom.com/wiki/User:Artistadam?oldid=2100512"
Community content is available under CC-BY-SA unless otherwise noted.