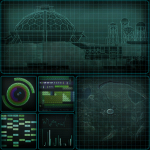 Blonde-haired, green-eyed, dressed in reinforced leather with a plasma rifle strapped to her back - meet Shaydlina, or "Shade" for short, the physicist with only one purpose: finding, and revealing, the truth.

That's me. I stand on the balcony of The Sink, gripping the railing tightly as the somber breeze brushes my face. Welcome to Big MT, my home, my new home, here, among the failed experiments, the overwhelming successes, forgotten memories, and broken hearts. But at least I have the successes with me. The technologies, that is. Though the X-2 Antenna Array is of little use to me, my golden retriever, loyal as always, barks happily as it is equipped - er, taken out. Though replacing the bio med gel was quite a chore - after all, transferring a fragile brain from one tank to the next is not an easy task - honestly, I'm happy to do it. The golden retriever has saved my life more than once. Even though it was a brain in a tank attached to a mini-gun, it was still close to my heart.

As was my armor - literally and figuratively. Though I may be a Med-X addict thanks to her, she has saved my life many times as well - in fact, more than the dog. And I'm very thankful for that.

I go back inside the Sink. Scattered everywhere are items of my collecting - Teddy bears, Nuka-Cola trucks, Chessboards, a few Dino toys, and several cards. The Toaster thinks this collection of mine is childish, and I have to agree. It was. Is. I don't know why I collect them.

Maybe because I don't remember my childhood, where I was born. My parents? Nothing. I was raised in the Wasteland, by the Wasteland.

Looking at the old picture plastered onto the wall, I began to wonder. Is Dr. Mobius really the bad guy I've been told he is? He was just trying to do his best to stop The Think Tank.

No. It's Klein. Dr. Klein is the real villain here. The others just follow what he says because they've never done otherwise. Klein had basically brainwashed them into thinking they need to escape.

But... maybe not. There are still several secrets left to discover, buried deep in the Old World soil of Big MT.

And I'm gonna figure 'em out.

As an avid fan girl of the Fallout: New Vegas add-on Old World Blues, I've done much research on the subject, compiled piles of papers with research results and observations. My favorite doctor is Dr. 0 - mainly because I can relate to him. I never do anything quite right, and deny it. I have anger issues - get frustrated easily. Just like him.

I would like to post my findings here in order to organize them all neatly, unlike they are now in piles around my room. So I'll put all of them here, as well as all of my written scripts, imagining parts of Big MT that don't exist.

Cold as stone, hardened by years of seeing war and death, his wife was taken hostage by some slavers about two years ago. After finding who had sold her off and killing them, Courella had earned Boone’s trust - and his companionship (which was much appreciated).

Raised in a large family, called the “Brotherhood of Steel,” Veronica was taught to love pre-War weapons and their mechanics. Though, on the inside, she wishes to be just like a regular woman, in heels and dresses. She’s often optimistic and emotional - but, she’s just misunderstood too much to fit in.

Shadelina (Shade)’s younger sister. The two were separated at birth and thrown into two different timelines. In one of them, Shade is the one who receives the message, and in the other, Courella does. Unlike her stealthy, cautious relative, Courella is a physicist - scientific and logical.

[Scene: the Mojave Desert, June, 1981. It is nearing 19:00. The place seems to be an old, worn-down, abandoned drive-in with graffiti everywhere. Garbage is found all over the ground, but the sky is still clear as the sun begins to set. A crashed satellite, still twitching a bit and with a blue orb in the middle of it, lay broken in the middle of the drive-in. COURELLA, followed by VERONICA and BOONE, trudge in from stage right, going down a hill. They look weary and tired from their long journey here. BOONE leans over, marveling at the broken technology on the ground.]

BOONE: Well, would you look at that.

VERONICA: So, this is the place?

COURIER: Yep. I… think. This is where it lead me.

BOONE: This place. I mean, it used to be a working movie theater - a place of joy and fun and… and memories.

VERONICA: ...but all of that’s lost now, isn’t it. Tossed to the wind. Forgotten.

COURIER: That… that is sad.

BOONE: What’s this thing here? [he walks over to the satellite, knocking on its metal surface.] Seems advanced, that’s for sure.

VERONICA: Pre-War tech, I’m guessing. A satellite. You know, those things that used to orbit earth.

BOONE: Wait, you call her “courier”?

COURIER: Well, it’s actually “Courella”, but I shorten it to “Courier” because it’s easier to remember.

COURIER: Hey, Veronica? I thought all the satellites either got destroyed or drifted out into deep space or something after the Great War.

VERONICA: Well, obviously, not all of them went missing.

COURIER: What… what are you doing?

VERONICA: Or, rather, investigating it. Seeing if it still works.

BOONE: And… poking it… gives you information…?

VERONICA: Exactly at midnight? Seconds included? [pausing] There must be a reason for that… it just couldn’t be a complete coincidence.

VERONICA: How d'you figure that?

COURIER: Aaaand back on topic. What could the timing mean?

COURIER: That would put us at 12 latitude, 0 longitude. Just off the southwest border of Africa. In the ocean.

BOONE: Yeah, I don’t think so.

COURIER: Coordinates are out.

COURIER: Maybe… perhaps, we should wait till midnight itself. See if anything happens then. If not, well, I don’t know what else it could be.

VERONICA: So… then… if that’s the plan… what do we do ‘til then?

COURIER: What about… well, let’s see what we have with us. [she takes off her backpack and searches through it, taking out items as she lists them.] Hm… a few scalpels, a coffee mug, a wrench…

COURIER: Oh! And some cards!

COURIER: Blackjack? I got a few caps I can spare.

BOONE: I have a bit.

COURIER: Alright then, shall we play?

COURIER: I swear, Boone’s been cheating.

VERONICA: [looking over at the satellite, which is now lit, as the blue orb is revealed to actually be a projector. It now emits an image of an eye, moving from side to side in a looping gif, seemingly watching over the whole Drive-In.] Look at that! The satellite!

BOONE: So it isn’t broken, after all.

VERONICA: Should we go look at it?

BOONE: Wait, it could be dangerous.

COURIER: So? [she walks over to the satellite with VERONICA behind her. BOONE sighs, gets up, and follows them.]

(see the blog for the rest!)

One of the best singer/songwriters out there. Ashly Simple is 12 years old and making music. Amazingly. She recently released a song, The Big Empty, as a result of my requesting.[1]

Retrieved from "https://fallout.fandom.com/wiki/User:AShatteredDream0?oldid=2839501"
Community content is available under CC-BY-SA unless otherwise noted.