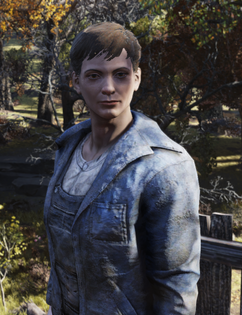 Ursala, referred to as a Settler in-game, is a guard living at Anchor farm in 2103.

Ursala spends most of her time on the roof of the farmhouse, taking position in a wooden guard post built on the home itself. She is generally mistrusting of the Vault Dwellers and would prefer for the settlement to be left alone.

Ursala appears only in Fallout 76, introduced in the Wastelanders update.

Retrieved from "https://fallout.fandom.com/wiki/Ursala?oldid=3378896"
Community content is available under CC-BY-SA unless otherwise noted.