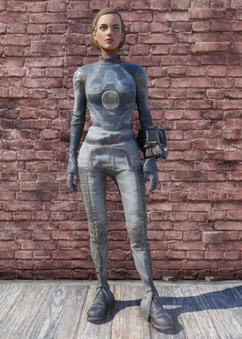 The Urban Operative underarmor consists of tactical boots, pants, gloves, and a long sleeved shirt bearing the Enclave logo on the chest. The armor has two belts across the torso to hold it to the body. The underarmor is in a grey color with dark highlights.

The Damage Resistances of underarmor can be upgraded at any armor workbench once the player character has learned the appropriate plan.

This section is transcluded from Enclave underarmor linings. To change it, please edit the transcluded page.

Worn by a male

Concept art by Katya Gudkina
Add a photo to this gallery
Retrieved from "https://fallout.fandom.com/wiki/Urban_Operative_underarmor?oldid=3481777"
Community content is available under CC-BY-SA unless otherwise noted.