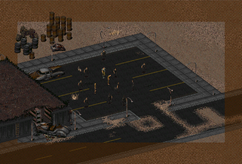 Unwashed Villagers fighting a spammer is a special encounter in Fallout 2.

The Chosen One meets a group called the Unwashed Villagers fighting a spammer named Grim Reaper. Killing the Grim Reaper will cause all of the villagers to flee.

Killing everyone except the Grim Reaper will cause him to repeat his combat dialogue while walking around in circles. To finish the encounter, one will need to use up to six super stimpaks on him to keep him alive, while simultaneously attacking the villagers.

The villagers featured in the encounter are: