Avoiding damage from an attack 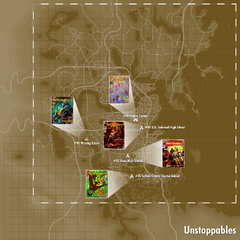 Unstoppables is a perk magazine in Fallout 4 that gives the player character ranks of the Unstoppable perk.

The Unstoppables is a comic book published by Hubris Comics. The group is formed of the Silver Shroud, Mistress of Mystery, The Inspector, Manta Man and Grognak the Barbarian; characters which all appear in different comics.

Upon reading, the Sole Survivor gains a level of the Unstoppable perk which gives a +1% chance of avoiding all damage from an attack. This perk can be stacked up to five times, giving a 5% chance to avoid all damage. 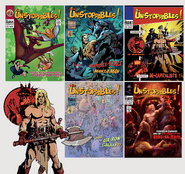 Clean versions from The Art of Fallout 4
Русский Українська
Community content is available under CC-BY-SA unless otherwise noted.
Advertisement