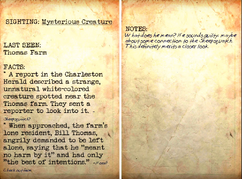 The bottom note on the rightmost board

Unsolved: Sighting at Thomas farm is a paper note in the Fallout 76 update Wild Appalachia. It starts the quest Unsolved: Best of Intentions.

The note can be found in Van Lowe Taxidermy on the connection board in Calvin's office, but cannot be added to the player character's inventory.

FACTS:
* A report in the Charleston Herald described a strange, unnatural white-colored creature spotted near the Thomas farm. They sent a reporter to look into it. -Sheepsquatch?
* When approached, the farm's lone resident, Bill Thomas, angrily demanded to be left alone, saying that he "meant no harm by it" and had only "the best of intentions." - Hoax? Check out farm

NOTES:
What does he mean? He sounds guilty, maybe about some connection to the Sheepsquatch. This definitely merits a closer look.

Retrieved from "https://fallout.fandom.com/wiki/Unsolved:_Sighting_at_Thomas_farm?oldid=3243256"
Community content is available under CC-BY-SA unless otherwise noted.