Unsolved: Best of Intentions is a side quest in the Fallout 76 update Wild Appalachia.

Go to Thomas farm and investigate the area for the following clues:

Find Mr. Thomas' hunting cabin east of East Mountain lookout to find out the truth behind the albino radstags found at the farm. A confession note detailing the events is on the floor inside the cabin.

The quest starts upon reading either the note on the board in Calvin van Lowe's office at Van Lowe Taxidermy or the note pinned to the bottom of a bulletin board at at train station. Head to the Thomas farm, located due northeast of Dent & Sons Construction, deal with the hostile albino radstags, and search for five clues in the barn and the remains of the house. Optionally, grab the chemical testing kit from the kitchen counter. Use it to analyze the sample taken from the aerosolizer on Mr. Thomas' terminal in the barn, and it will point to an area east of the East Mountain Lookout and west of Kerwood Mine. Head down from the lookout along the path to find Mr. Thomas' hunting cabin, and find the note on the floor next to the sleeping bag. Read the note to learn that Mr. Thomas was behind the creation of the albino radstags, doing so completes the quest and solves one of the mysteries that Calvin had wracked his mind over during his hunt for the Sheepsquatch.

The hunting cabin where Bill Thomas and his dog Winston died 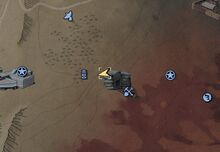