“It's simple, really. From time to time, Ashur opens up the arena. Any slave who wants to can fight against the gladiators. If you win, you get your freedom. More importantly: you get an audience with Ashur. It's the only way a slave will ever get to talk to him directly.”— Midea

Unsafe Working Conditions is a quest and achievement/trophy in the Fallout 3 add-on The Pitt.

Depending on dialogue choices, the Lone Wanderer may be beaten unconscious by the Pitt raiders, or they may walk to Midea's quarters without too much harassment from the raiders.

The entrance to the steelyard is through a small buffer zone called the abandoned area. The steelyard is an extremely large area, and is inhabited by feral mutated humans - nicknamed 'trogs' by the citizens of The Pitt. A door in The Mill leads to the abandoned area. In turn, the door to The Mill is in the corner of Downtown where Adan is welding.

As all weapons (minus the possible Concealed .32 pistol or Switchblade) have been confiscated at this point, it is advisable to acquire an auto axe from Marco in The Mill before proceeding, as the steelyard is filled with trogs. unarmored player character. Asking Kai - who lives across the square from Midea - for some Slop is ideal as well.

Everett oversees all work in the steelyard and congratulates the player character on their misfortune of being chosen to do such a dangerous task. He will walk the them through the abandoned area, and point out a trog scampering on a catwalk above. Everett will stop at the door and tell the player character to proceed inside.

The steelyard is easily one of the largest areas in Fallout 3. It is an urban jungle of rusted steel catwalks, mammoth pipelines, and derelict buildings, as well as a relatively intact supply plant to the east. The first two ingots can be found directly in front of the player after entering the steelyard, along with an assault rifle and some ammunition. Further ahead, the player character will stumble upon a slave trying to reason with his brother, Billy, now a trog. The trog will eventually attack the horrified slave if one does not intervene. Killing 'Billy' will cause the slave to mourn the death of his brother.

The rest of the steel ingots can be found all over the Steelyard. See the page Steel ingot for extensive information on finding each ingot.

After the player character leaves the steelyard for the first time, they are presented with a trog that has ripped through the fence in the abandoned area and now stands between the player character and the door to The Mill. Fortunately, the hole it ripped in the fence opens up a new area with 3 steel ingots to scavenge.

The player character will also receive the Auto Axpert perk upon collecting the 10th Ingot, which boosts the player character's damage with the related weapon and its variants. At this point the Lone Wanderer must return to Midea.

Midea tells the player character to prepare for a fight in The Hole, which she explains is one of the only ways a slave can earn their freedom, killing fellow fighters in order to be promoted to the ranks of The Pitt raiders. Outside, Ashur will address his workers from a balcony above the square in front of Midea's house, talking about The Hole and asking for volunteers to fight for their freedom. Midea speaks for the player character, volunteering them, and Ashur accepts.

Signing up for the battles in The Hole is quite simple. Faydra is in charge of the fights and is located in a room in The Mill, at the bottom of a flight of stairs. The entrance to the stairs is tagged with a sign that reads, 'Arena'. Faydra will inform the player character of the rules and the like. There is a locker in the room that contains common weak weaponry, usually a low-caliber pistol and a few makeshift melee weapons. If the player intends to complete the unmarked quest Mill Worker, doing so before fighting in the Hole will earn good equipment and which makes the fights much easier. There are three fights to endure, ranging from one to three opponents each time. When the player character finishes the third fight against Gruber, he drops the Infiltrator, an assault rifle with a scope and suppressor. 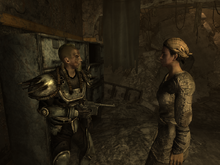