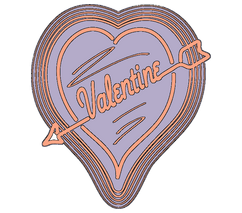 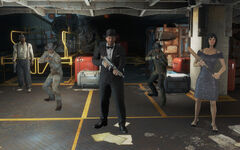 Skinny Malone and his gang waiting at the exit of Vault 114.
Fallout 4 achievement/trophy

“There's an old vault down there that they use as a base. I told Nick he was walking into a trap, but he just smiled and walked out the door like he always does.”— Ellie Perkins

Unlikely Valentine is a main story quest and achievement/trophy in Fallout 4.

Ellie Perkins reveals that Nick Valentine is being held captive in Park Street station. The vault is guarded by Triggermen armed with submachine guns, 10mm pistols and, at higher levels, .44 pistols. Inside the station is the entrance to Vault 114.

The Sole Survivor must fight their way through the vault until they come to a large open atrium. Guarding the overseer's office, where Nick is being held, is a Triggerman named Dino. Sneaking close allows the Sole Survivor to listen to their conversation, where Valentine convinces Dino that a crime boss is upset at him about his cheating habit during gambling. Dino then runs out of the room to square things off with said crime boss, leaving the coast clear to free Valentine. Alternatively, Dino may be killed without waiting for him to leave, dropping the key to the overseer's office. The control panel next to the office door can then be used to free Valentine.

Speaking with Nick reveals why he is there and that they should leave as soon as possible. On the desk behind him is the Speech bobblehead. After talking with Nick, he will take the lead out of the vault where Skinny Malone and Darla will be waiting to stop the escape. With a few speech checks, it is possible to turn them against each other or leave the vault without fighting at all. If a certain stage of the unmarked quest, The Sight has been completed before coming to the vault, there will be an additional speech option to solve the situation without violence. If any of these speech checks succeed in obtaining a non-violent solution, Darla will depart and Skinny Malone will advise that they have 10 seconds to leave. Otherwise, the Sole Survivor and Nick will need to kill Skinny Malone and his bodyguards in order to leave.

After exiting the vault there is a short conversation with Nick where he directs the Sole Survivor to meet him back at his office in Diamond City. Upon arrival, speaking with Ellie will end the quest.

ends the conflict with Skinny Malone peacefully, attacking him, Darla or the remaining Triggermen, while they are not hostile, does not count as murder in the Pip-Boy's crime statistics.

Retrieved from "https://fallout.fandom.com/wiki/Unlikely_Valentine?oldid=3500236"
Community content is available under CC-BY-SA unless otherwise noted.