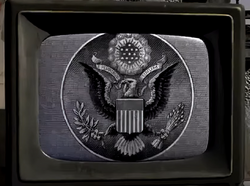 In March 2077, the Enclave and last president established itself on the Poseidon Energy oil-drilling platform known as Control Station ENCLAVE, situated off the coast of San Francisco.[Non-game 1] This location was discovered by the Boston-based newspaper Boston Bugle.[2] In the event of a nuclear war, this was intended to ensure the continuity of the U.S. government's leadership.

The constitutional status of the Enclave's president of the United States was questioned by the Brotherhood of Steel. Matthew, their representative in San Francisco, referred to President Dick Richardson as the "so-called President."[3] By 2277, there was no U.S. government presence at federal government buildings such as the Pentagon and the Capitol, as the Capital Wasteland had no central political authority or law enforcement mechanism.

There were some executive agencies present after the Great War, such as the Secret Service and the Atomic Energy Commission. NASA, the National Aeronautics and Space Administration, is mentioned by Vice President Daniel Bird.[4] The United States Armed Forces were present and its Enclave patrols at the Navarro perimeter also acted as a border patrol.

The judicial or legislative branches mirrored after the war is only mentioned in terms of courts-martials performed by officers of the Enclave's armed forces.[5]

A new self-proclaimed president of the United States appeared, John Henry Eden, from the Raven Rock military base on the East Coast in the Capital Wasteland near the ruins of Washington, D.C. Despite the fact that some of the remnants of the Enclave government had survived after the destruction of the Enclave's oil rig in 2242, Augustus Autumn stated Eden was next in the chain of command.[7]