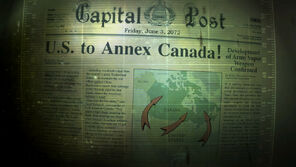 “You know what's been stopping the Reds from pouring into downtown Juneau? American soldiers, that's what. And now we've got to worry about someone - Chinese, Alaskan, or otherwise - taking out the pipeline? I don't think so. Effectively immediately, United States troops are beginning a complete takeover of all Canadian assets and resources. Little America is ours. But let's face it - it always has been.”— General Buzz Babcock

The United States annexation of Canada was an event that took place before the Great War.

The primary reason for the annexation was Canada's natural resources, considered vital to the American military effort in the Sino-American War.[2]

In 2059 the Anchorage front line was established in Alaska, to protect its natural resources from the People's Republic of China.[citation needed] As parts of the Alaskan pipeline cross Canadian territory, the U.S. government pressured the Canadian authorities into allowing American military units to station near the pipeline and provide security.[Non-canon 1]

After the Chinese invasion of Alaska in 2066, increasing U.S. military presence in Canada began to raise tensions to the point of riots.[3][Non-canon 2] By 2069, Canada became Little America in the minds of U.S. citizens, with vast stretches of timberland destroyed beyond recovery.[Non-canon 3] Protests and riots erupted in several Canadian cities and an attempt to sabotage the Alaskan pipeline by unknown forces was foiled but provided the U.S. government an excuse to officially annex the country.[1][Non-canon 2]

When pictures of the atrocities made their way to the United States, they sparked unrest and protests from the American public.[Non-canon 4] Provinces such as Ontario became U.S. territories.[4] To some members of the United States military, the act was considered criminal.[5] In a statement to the press, General Buzz Babcock, commander of U.S. forces in Canada, cited security concerns as the primary reason for the annexation. He also stated that "Little America" was always the property of the United States and the U.S. military announced the official annexation of Canada on June 3, 2072.[1][Non-canon 5]