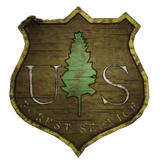 The United States Forest Service was a pre-War government agency.

The federal agency was a division of the Department of Agriculture, responsible for the management and preservation of 25% of forests across the United States. The other 75% was managed by the Department of the Interior's National Park Service.

Before the war, the Forest Service was founded to protect the United States' national forests and grasslands. Various ranger cabins and ranger offices were left in disuse sometime after the Great War.

The United States Forest Service appears in Fallout 4 and Fallout 76.

Dolly Sods campground
Add an image to this gallery
Retrieved from "https://fallout.fandom.com/wiki/United_States_Forest_Service?oldid=3265603"
Community content is available under CC-BY-SA unless otherwise noted.