The history of the Air Force, the newest branch of the military, dates back to 1907 with the foundation of the United States Aeronautical Division of the Signal Corps. Although it had a turbulent organizational history, it became one of the most important assets of the American war machine, particularly during World War II, when military aviation was a crucial asset in defeating Germany and the Empire of Japan. Initially founded as part of the United States Army, the USAF reformed into a separate branch of the military in 1947.[1]

The Air Force was instrumental in pioneering manned spaceflight and the militarization of space, with the pioneering flight of Defiance 7 on May 5, 1961, when Captain Carl Bell became the first human in space. However, the claim was widely disputed by the Soviet Union and China.[2] Subsequent manned spaceflight tests perfected the technology, despite setbacks such as the loss of Clarabella 7 and Colonel Hartigan to high-altitude weather balloons (the body was never recovered, as the capsule was actually intercepted by Zetans researching the human population).[3][4]

By the end of the 1960s, the United States had achieved victory in the space race, as the Virgo II lunar lander touched down on the surface of Earth's moon on July 16, 1969.[5] Valiant 11 mission members, Captain Richard Wade, Captain Mark Garris, and Captain Michael Hagen became the first humans to walk on the surface of another celestial body[6] - with weapons drawn.[5] With the gradual exhaustion of resources, the space exploration program would peter out by 2034, when the remaining space exploration vehicles like the Delta IX rocket were converted to military ordnance - foreshadowing the eventual fate of the American state.[7]

As the most powerful military in the world, the Air Force's weapons were second to none. Personal equipment used by the Air Force was no different than that of the United States Army or the United States Marine Corps, and usually consisted of rugged, reliable equipment like the standard flight suits and combat armor. Additionally, remnants of Air Force uniforms can be seen worn over Vault 34 jumpsuits by the Boomers at Nellis Air Force Base.

The standard fighter plane of the Air Force at the time of the Great War was the Lockreed fighter jet[9] and the Stingray Deluxe.[10] It is known that the Air Force operated nuclear-armed bomber planes, however, no surviving models have been found in the wasteland.

To support its operations, the Air Force operated air force bases throughout the nation. One of the most important was Adams Air Force Base, linked directly to the White House and the Capitol Building by metro. The Commonwealth of Massachusetts was also a major staging area for Air Force operations, including their nuclear bombers outfitted with Mark 28 nuclear bombs,[10] and satellite surveillance, as was the case with USAF Satellite Station Olivia.[11] 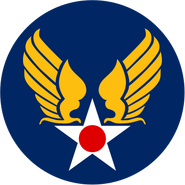 Lockreed Fighter jet
Add a photo to this gallery

B-24 Liberators in formation

B-29
Add a photo to this gallery 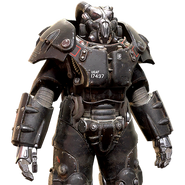 Retrieved from "https://fallout.fandom.com/wiki/United_States_Air_Force?oldid=3484481"
Community content is available under CC-BY-SA unless otherwise noted.