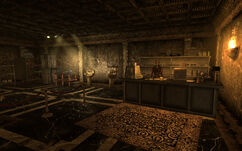 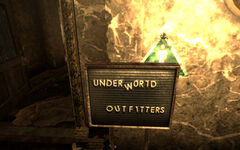 “Oh… a human… well, hello. Welcome to the Underworld Outfitters! It’s been so long since I had a customer!”— Tulip

Underworld Outfitters is a shop run by the ghoul, Tulip. It can be found on the east side of the ground floor of Underworld, and contains a variety of items.

Her store has a variety of armor and ammunition, and she also has a surprising amount of money (ranging from 400 to 600 caps), making her a great shop for mid level characters. Tulip generally sells a large amount of surplus army gear, having substantially more combat armor, 10mm pistols, and assault rifles than other shops. Tulip wakes up at 8:00am, but you can buy from her at any time.

Underworld Outfitters appears only in Fallout 3.

Retrieved from "https://fallout.fandom.com/wiki/Underworld_Outfitters?oldid=2211549"
Community content is available under CC-BY-SA unless otherwise noted.