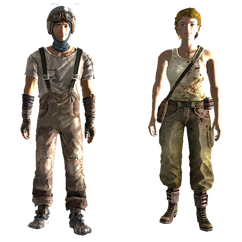 Underpass citizen is a Wasteland Adventurer-class character. There are six characters listed in the GECK: four male and two female. Given the name, they were meant to live near in Underpass north of New Vegas.

Underpass citizens were added during the development stages of Fallout: New Vegas, but they were cut from the final retail release of the game.

Retrieved from "https://fallout.fandom.com/wiki/Underpass_citizen?oldid=2688997"
Community content is available under CC-BY-SA unless otherwise noted.