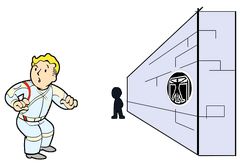 “I was hoping for more time to organize our rebellion, but it's clear we cannot delay. Once you secure the Railroad against the Brotherhood, tell your people we are ready to fight. Go now.”— Z1-14

Underground Undercover is a Railroad main quest and an achievement/trophy in Fallout 4.

After the Sole Survivor gets into the Institute, the Railroad wants them to make contact with an anonymous person inside, nicknamed Patriot, who has been helping synths escape. Tinker Tom provides the encrypted message holotape (Network Scanner holotape) that will upload a message for Patriot to the Institute's network in the hopes that Patriot sees it and comes forward to identify themselves.

After uploading the message, the Sole Survivor should read the 'Urgent Reply' message, which turns out to be a message from Patriot telling the Sole Survivor to meet him in a maintenance closet. Patriot turns out to be Liam Binet, an Institute scientist and son of Alan Binet, the head of the Robotics department. Liam expresses surprise that anyone decoded the messages he was sending out with each synth he freed and were then able to contact him back, and he is excited at the prospect of coordinating with the Railroad.

He introduces the Sole Survivor to a synth named Z1-14 who has been working with him to help synths escape. They discuss how many synths are ready to leave and propose a plan to free all thirteen at once with the Sole Survivor's help. To escape, Liam will need to bypass SRB electronic security to open some doors, but he isn't able to crack it. Instead, he requests a pre-War admin password from the surface. He recommends asking the Railroad for any leads on where to find one. It should be noted that the player must complete the quest Institutionalized at this point in order to be able to leave the Institute compound.

The Sole Survivor returns to Desdemona at Railroad HQ and is instructed to enter their mission report in the terminal in P.A.M.'s office. P.A.M. analyzes the data and recommends that the login credentials for Wilfred Bergman may be found in Cambridge Polymer Labs. Desdemona instructs the Sole Survivor to retrieve it while they consider Liam's plan.

The password can be found in the laboratory section of the building on the second floor. In order to access it, however, the quest Cambridge Polymer Labs must be completed before escape from the building is possible.

Looking over Liam's plan, Desdemona concludes that if it is successful, it may never be possible for Liam to free another synth ever again due to the Institute going on high-alert following such a security breach. She proposes instead that they should use this opportunity to free every synth in the Institute. To do that would require the synths themselves to rise up and fight for their freedom, instead of operating in the shadows. She instructs the Sole Survivor to give Liam the password he requested, but then to cut him loose and coordinate with Z1-14 instead from then on.

Back in the Institute, the Sole Survivor gives Liam the password, then meets with Z1-14 to discuss Desdemona's proposal. He agrees with the plan and asks for 24 hours to ensure that it is possible. He speaks with the other synths and is surprised at how many volunteers he receives. They will need weapons, however, so he requests that the Sole Survivor aid them by killing a few guards so they can stage a construction accident, allowing a few synths to go into hiding in order to construct weapons. The Sole Survivor may optionally offer to provide additional weapons, which Z1-14 instructs to be placed in a maintenance closet.

The guards are in a maintenance tunnel between Synth Retention and Robotics. After they are dispatched, the worker synths will give their thanks and collapse the tunnel after the Sole Survivor departs. Speaking with Z1-14, he gives his thanks as well and states that they need time to prepare. In the meantime, the Sole Survivor should keep working with Father until they are ready. At this point the quest is put on hold until the Institute orders the Sole Survivor to take on the Railroad during End of the Line.

After meeting with the Directorate, a runner will arrive in the meeting room with a message from Z1-14 that the Sole Survivor's quarters have flooded and they are needed there immediately. When they arrive, Z1-14 states that he's discovered that the Brotherhood of Steel have found the Railroad HQ and are preparing to attack, so the Railroad needs to be warned as soon as possible.

Retrieved from "https://fallout.fandom.com/wiki/Underground_Undercover?oldid=3312769"
Community content is available under CC-BY-SA unless otherwise noted.
... more about "Underground Undercover"
RDF feed
Has platform
PC +, Playstation 4 +  and Xbox One +