Uncle Roe's house is a location in Canterbury Commons that belongs to Uncle Roe.

Uncle Roe's house looks like a pre-War fire station. It contains two main rooms, one of which seems to serve as a bedroom, and another which serves as a storage room.

Inside Ernest "Uncle" Roe's house, there are local inventories for the traveling merchants. These containers hold anything one might find in Crow, Crazy Wolfgang, Doc Hoff and Lucky Harith's inventories. While taking items from the local inventories counts as stealing and will result in loss of Karma, taking from the inventories in the storeroom will not.

When opening the refrigerator while Derek is sleeping, Uncle Roe's inventory may appear instead. Taking items affects your Karma as regularly. [verified] 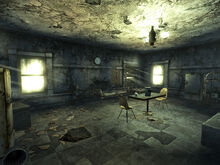 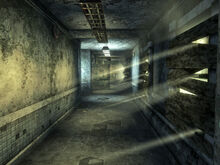