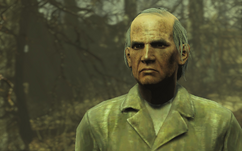 "Uncle" Ken is a resident of the Island in 2287. He is supposedly the last harborman not living on the Far Harbor pier.

Uncle Ken is the seventh generation of his family to live at the National Park visitor's center and the last holdout alive who did not retreat to the pier. He is the uncle of Mitch, the bartender at the Last Plank. When Mitch is first approached, he may ask the Sole Survivor to check on his uncle. Uncle Ken insists he must stay at the visitor's center, so as not to dishonor his ancestors.

Uncle Ken is eccentric and paranoid, as well as anti-social. Subject to attacks by ghouls and trappers, he manages to survive living alone by using a series of traps, as well as his own firepower. However, he can be convinced to leave for the pier with a successful speech check.

While many residents of Far Harbor state that Uncle Ken is the last of the harbormen living outside the town, this is technically inaccurate, as Old Longfellow also lives outside the town's walls, albeit still close by.

Uncle Ken appears only in the Fallout 4 add-on Far Harbor.

Inside The Last Plank
Add a photo to this gallery
Retrieved from "https://fallout.fandom.com/wiki/Uncle_Ken?oldid=3295944"
Community content is available under CC-BY-SA unless otherwise noted.