Who Sat Down Beside Her

The Uncanny Caverns is a location in the Savage Divide region of Appalachia.

A pre-War tourist destination, composed of a series of caverns and tunnels, as well as a reception and gift shop.

A major tourist attraction in West Virginia, the caverns' tour guides were instructed to emphasize the legend of the Night Kid. The Night Kid, according to legend, was a small boy who had been discovered in the caverns living with bats. The caverns offered self-guided and guided tours to customers, as well as premium passes that allowed customers to explore otherwise off-limits areas. Self-guided boxes allowed visitors to enjoy the views, narrated by Dick Shale.[1]

Uncanny Caverns ran into financial troubles in 2077, with September gross sales totaling $75,245.29, as compared to the $84,759.47 in August. Though expected after the holiday season, the management decided to focus on increasing sales of an upgraded tour package and increase base admission prices in the face of a worsening economy. The base ticket price was $14 for ages 13+, $7 for children 6-12, and free for the youngest visitors, producing 1189, 1578, and no sales respectively, for a total of $27,692. The packaged offers like Wild Cave Tour (ages 10+) and Extreme Adventure Tour (all tours bundle with Devil's Toll passes, ages 16+) generated $34,888 and $7,697, from 392 and 43 sales at $89 and $179 respectively. Only four standalone Devil's Toll passes were sold at $99 apiece, prompting management to scrap them in October, while gift store sales totaled 762 sales for revenue of $4,572.29. All numbers being pre-tax.[2]

The entrance and gift shop consists of a run-down building and contains old souvenir shelves and check-out desks. A ramp outside the building, which can be accessed from the righthand side of the entrance building, leads down to the entrance to the caverns. The location is guarded by mole rats and weak feral ghouls.

The caverns consist of five separate caverns, connected by a looping wooden walkway. There are also several small tunnels and nooks along the path, which feature stories about the Night Kid and information about various natural features, such as a pool of "pure" water and a small stream. It appears that many people tried to hide in the caverns after the bombs fell, as skeletons and supplies can be found throughout the caverns. There are ten audio tour stations along the path that explain the various caverns and features.

Enemies inside the caverns vary and are leveled. Apart from the standard feral ghouls, mole rats and mole miners, a number of other creatures can be encountered, dependent on player character level, from mirelurks and hunters to a random encounter leveled glowing wendigo.

The Uncanny Caverns appears only in Fallout 76. 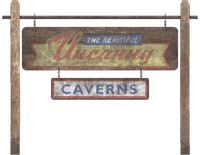 Retrieved from "https://fallout.fandom.com/wiki/Uncanny_Caverns?oldid=3509332"
Community content is available under CC-BY-SA unless otherwise noted.