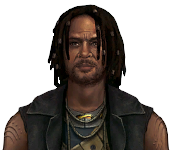 “The day I set my flag down, it'll be over my body or over a nation I believe in.”— Ulysses

Ulysses is a mysterious courier roaming the Mojave Wasteland in 2281. Ulysses was one of seven couriers hired by Victor[1] to carry strange packages to the Strip North Gate, but his delivery, the Platinum Chip,[2] was left to the Courier after Ulysses' mysterious disappearance.

Ulysses was once a successful bighorner rancher at Wolfhorn ranch,[3] but he recently abandoned his ranch and is now nowhere to be seen. This is the only detail known so far about his life, everything else is inferred from evidence he has left behind on his travels.

Ulysses is known to have visited the Big Empty at some point, where he was caught up in the conflict between Knight Royce of the Circle of Steel and Father Elijah. It was there that Ulysses rescued Royce from the Y-17 medical facility, nursing her back to health in a nearby cave.[4] At some point after Elijah spoke with the Think Tank (whom Ulysses regarded as the "Gods" of the locale), Ulysses and Elijah made contact, at which point Ulysses directed him to the Sierra Madre - and his subsequent death. Ulysses, too, spoke with the Think Tank, specifically Doctor Klein, who recalls him as a melancholy fellow who asked a lot about history. The conversation was interrupted twice - once by Elijah's escape attempt, and then again in an event that seems to have been erased from Klein's databanks. Klein notes that Ulysses was never brain-scrubbed like the other visitors, so there exists a possibility that he left with some knowledge that he should never have possessed. Ulysses also spoke with Doctor Mobius, who recalls him asking about "what makes a nation?" - a question that the Think Tank regarded as extremely dangerous.

Learning from the Think Tank was apparently not his only objective in the Big Empty - in fact, what had drawn him to the location in the first place was the X-17 meteorological station.[5] This, coupled with references on a terminal at the Y-0 research center to a geoengineered disaster near Hopeville and the mysterious map displayed at the weather station, seems to suggest that Ulysses has some interest in the weather patterns of the Divide. This is further reinforced by Ulysses' repeated references to the location, and his insistence that the Courier travels to the Divide to "sink their feet in Old World ash" and "see what happened".

A major question surrounding Ulysses is that of his allegiance. When the Courier visited Zion Canyon, Joshua Graham commented that when he heard a courier was coming, he had expected another. He said that he had heard stories of one of the Frumentarii traveling as a courier and stalking the land in search of enemies of Caesar, although he says that he finds it unlikely that said courier would associate himself with the Happy Trails Caravan Company. However, Ulysses mentions in the Patient log: Y-17, a conversation between him and Christine Royce that he had thought the Brotherhood might be the last hope for the Mojave, the West, and the East, but ultimately found that they were "no better" than the Bull and the Bear, and that there was "no future" in any of them. It was confirmed however that Ulysses did indeed work for the Legion, and was responsible for arming and training the White Legs.

It seems that Ulysses' ultimate goal is to reawaken the Old World in the shape of one of the new societies that has emerged in the aftermath of the Great War, and that his journey has been one of finding a suitable society to carry out his vision. This hypothesis, however, is far from reconciliation with the stories recounted by Graham, and fails to address Ulysses' apparent obsession with the Divide whatsoever. It is possible that he consorted to some extent with both NCR and Caesar's Legion, and found them to be wanting in terms of their capability of carrying out his vision.

At some point before the Second Battle of Hoover Dam, Ulysses contacts the Courier via radio transmission, promising to explain the incident in Primm in exchange for one final job. Depending on how Dead Money ended, the ending slides say that word would eventually reach both Christine and Dog of some sort of a battle in the future. The battle is said to take place at the Divide, "beneath the torn skies and the old world flag", between the two couriers, "each carrying a message for the other".

Ulysses is known to have some sort of a relationship with the Courier,[6] but the nature of this relationship is unknown.

Ulysses' dual obsessions with the Courier and the Divide seems to suggest that Ulysses may in fact be one of the fabled survivors of whatever happened there, and that Ulysses' seeks the Courier for their involvement in that event - whether it was conscious or not. The possibility that the Courier may not even be aware of his or her own involvement in the event is also something hinted at by Chris Avellone, who stated cryptically, "I also have a lot of love for Ulysses in Fallout, only because I like the idea of someone hunting my player for reasons of his own, and then hearing the reasons why… and realizing how important even the smallest of my actions are for the people of the wasteland – living or dead".[7]

Ulysses was originally supposed to appear in Fallout: New Vegas, but was cut from the final version of the game. He is mentioned indirectly in Dead Money and Honest Hearts, appears in voice in Old World Blues, and makes a full appearance in Lonesome Road. 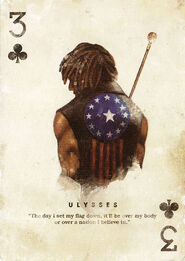 Retrieved from "https://fallout.fandom.com/wiki/Ulysses?oldid=1382501"
Community content is available under CC-BY-SA unless otherwise noted.